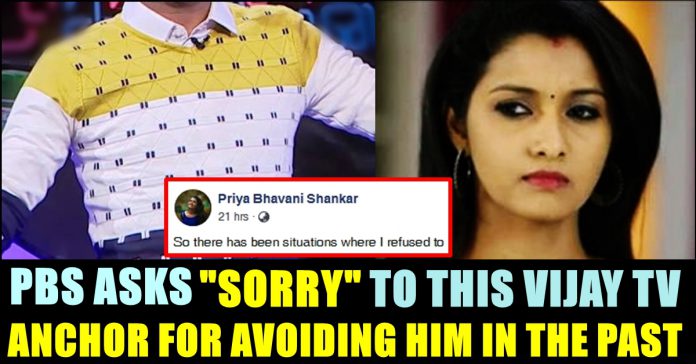 Priya Bhavani Shankar feels very bad for being mean to Jagan, one of the popular actor and former host of Vijay TV. Jagan and Priya Bhavani Shankar started their in career in Vijay television as host and actor respectively. In a recent facebook post, Priya regrets for deliberately avoiding Jagan’s show in the past when they both are working for the same channel.

Jagan rose to fame through a Vijay Tv show called as “Kadavul Paadhi Mirugam Paathi” in which he reviewed movies. Then he started acting in movies and did a significant role Suriya’s Ayan in which he played the role of Tamanna’s brother and as a friend of Suriya.

Later he hosted a show called as Connexion in Vijay Tv which is a celebrity game show. In the show, Jagan, to make the audience engaged, would roast the celebrities who are taking part in his show. The game is played by three teams – and each team will have one celebrity and the other person could be their friend or family.

Most of the celebrities who are taking part in the show would be an actor who belongs to one of the Vijay Tv’s serial. It seems Priya Bhavani Shankar who acted as lead in Kalyanam Mudhal Kaadhal Varai serial was offered to take part in the show several times. But the actress turned down the opportunities and revealed the reason behind it now.

Posting a picture of herself alongside actor Siddharth with Jagan and his wife Vaanmathi, Priya said that she was so judgmental in the past which made her not to take part in his show. Check out the pictures posted by Priya below :

The post of Priya read as “So there has been situations where I refused to be a part of this man’s show when I was in channel and now I am unconditionally apologetic for being so judgmental and it’s unfortunate am getting to know you in person this late but better late than never😊 thank you Jagan na, vaan, Kavin&Vyasa for having us over❤️ and the welcome note is the sweetest, making me realise what a mean kid I was to our guests🙈 we should do this more with more food and love🤗”

Priya Bhavani Shankar and actor Siddharth are sharing screen space in upcoming magnus opus Indian 2 which has Ulaganayagan Kamal Haasan in the lead. The film is being directed by Shankar who made Siddharth as protagonist through Boys film.

Priya Bhavani Shankar’s first recognition was a Television News presenter in Tamil Puthiya Thalaimurai News Channel. The actress who gained many fan pages in social media platform in a very short span, has a separate set of fan following for her acting and screen presence. Priya Bhavani Shankar was last seen in SJ Surya’s Monster.

Previous articleMadhumitha & Family Uploaded Video Of Those 8 Housemates Harassing Her Inside The BIGG BOSS House !! WATCH VIDEO !!
Next articleFamous Actress Slammed Tamil Cinema Audience For This Reason !! CHECK OUT !!

With smashing an elegant half century in the league match against Rajasthan Royals, Virat Kohli became the first player to achieve the milestone of...