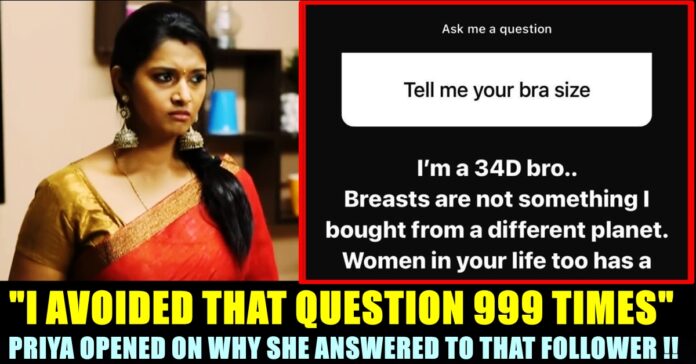 Emerging Tamil Heroine Priya Bhavani Shankar, in a recent promotional interview for her recently released “Hostel” film, opened on why she replied to a creepy question of one of her Instagram followers who asked her “size”. Priya said that she avoids such questions almost all the time but decided to reply to that one follower at that particular time as she belives in “sometimes you should stand up for yourself”

Priya Bhavani Shankar who is awaiting a handful of films of her to release in big screens, conducted a chat session with her Instagram followers recently and answered to some of the most complicated questions of them with ease. The emerging actress pushed her boundaries and went on to school one of her followers who was keen to know about the size of her brassiere.

Priya who is enjoying 2.9 million followers in the photo/video posting social media platform, conducted a chat session with them. Sha answered to many questions of them including about her personal romantic relationship, crush on colleague ect.

Taking advantage of the chat session, a toxic follower asked the actress to tell the size of her inner wear. Without losing her cool or backing off by ignoring the question, Priya schooled the miscreant with class.

Answering his question in a straight forward manner, Priya said that Breast is not something she bought from a different planet. She went to tell the Instagram user that women in his life too have breasts and asked him to zoom in their pictures to find out the sizes of their inner wears.

“I’m 34D bro.. Breasts are not something bought from a different planet. Women in your life too has a pair. Probably you’ll have to zoom through their t-shirts as well to catch a glimpse. Good luck for that” read the actress’s reply. 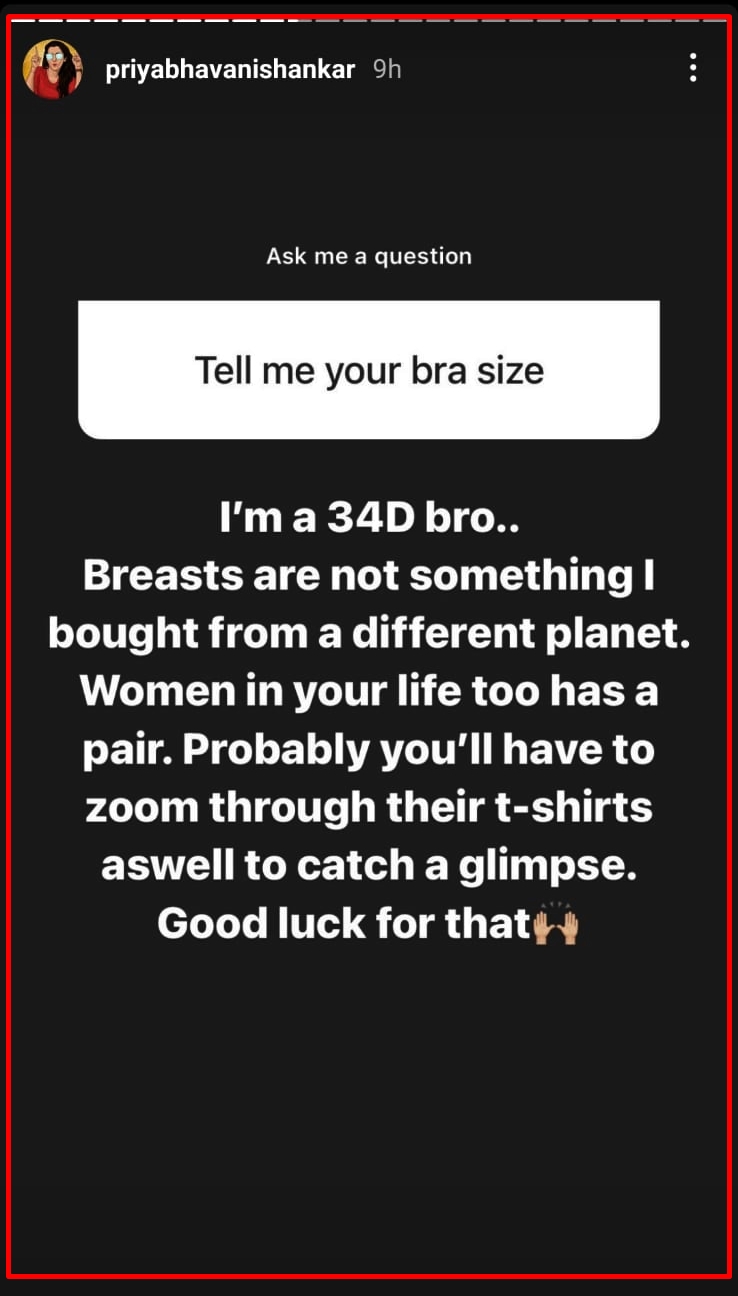 Recently, while replying to a YouTube channel host about the same, Priya said “It was not the first time I’m receiving such question. I have avoided such questions 999 times. It was reply just to brush off such toxicities”

“While it becomes a content for media channels, obviously it feels annoying as they are making it as a subject to public talk repeatedly. One thing I learnt over the years, is to ignore. I have avoided answering such questions 999 times as I know it’s better to ignore. But sometimes you should stand up for yourself. You don’t have to be vocal and have an opinion about everything all the time. But, at some point, even for once, you should stand up for yourself. I thinks it’s that” She added.

On the work front, Priya, “Hostel” of whom released in theatres recently, is expected to appear in films such as “Kuruthi Aatam”, ” Bommai”, “Thiruchitrambalam”, “Indian 2”, “Yaanai” etc.

Bigg Boss fame Madhumitha's husband came up with a shocking allegation against the management for using his footage in the finale episode. Bigg Boss...

On seeing, the frontline workers of Kasturba Gandhi hospital suffering without salaries for past three months , actress and former Bigg Boss contestant Raiza...