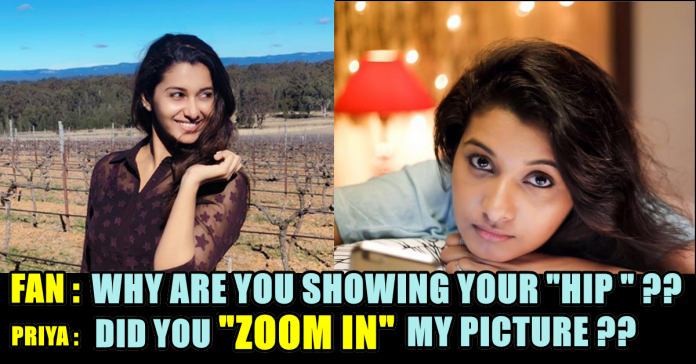 It might not be the first time that an actor’s clothing and style has been scrutinised by culture-upholding, moral-policing netizens. Several such online vigilantes took it upon themselves to let actor Priya Bhavani Shankar know that her choice of clothing had tarnished “Indian culture”, thereby reducing the hope that they had pinned upon the actor. One such Instagram user posted. “Sutham had huge hopes for you… No more a dream girl.. Hoping it wont get any worse thou,” he wrote.

In the picture, Priya is seen wearing a black shirt.

Not one to take such comments lightly, she responded saying, “Thank you very much but I don’t want to be a dream girl to a man of such filthy judgements. All the best to find another hopeful dream girl.”

Being happy never goes out of style🤗

A post shared by Priya BhavaniShankar (@actresspriyabshankar) on Jul 26, 2018 at 5:43am PDT This user further responded saying: “The true thing is we the loyal people’s u have those who support this image are the filthy one’s… This ain’t about being Orthodox it’s juz we care for you sadly you don’t see that.. Anyways you have your freedom…(sic)”

The actor also received a good number of supportive messages. She also wrote a longer reply to those who found her top offensive. “This is definitely not a reply with head weight. Am just trying to resist people like you deciding how I should hold my values and culture! Am surprised how people are trying to save culture by zooming in and out my picture. A little piece of semi transparent cloth has taken a toll to this culture. I don’t see anything so alarming in my picture. Seriously? You think people like you zooming it and picking nonsense and speaking nonsense and judging others are holding the culture high? With all due respect let me say loud and polite I don’t see anything screwing your so called culture and I can handle my values by my own than through these comments worried about my 1.5 inch of semi transparent cloth. Thank you very much.” Having starred in films like Kadai Kutty Singam and Meeyadha Maan, Priya began her career as a news anchor on Puthiya Thlaimurai TV. She gained popularity on her TV show Kalyanam Mudhal Kadhal Varai that aired between 2014 and 2017 on Vijay TV. Previously, actors like Amala Paul, Sonam Kapoor, and Priyanka Chopra, among others, have given it back to moralistic online trolls who’ve come their way to pronounce judgment on their life choices.

Previous articleBREAKING : Tamizh Padam 3 Starts Right Now Right Here !! Confirmation From The Director Himself !!
Next articleWatch : Virat Kohli Did An “Utter Local Terrific Dance” While Entering The Ground !! Dhawan Could Not Resist !!

Sourav Ganguly, the former captain of Indian cricket team led the team during the world cup of 2003 where he managed to take the...