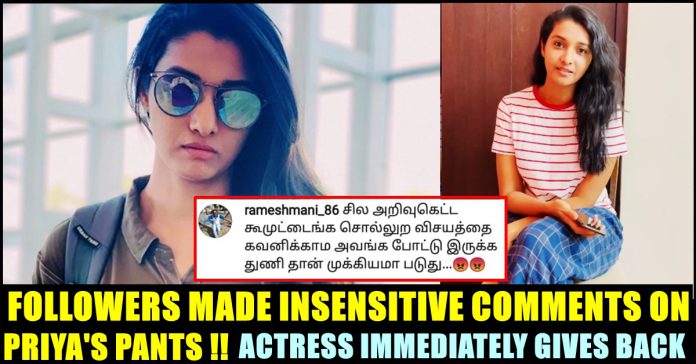 Priya Bhavani Shankar is pretty much active in social media platforms these days and is not shying away from giving back to trolls and negativities. On Monday, the actress came up with a reel video talking about a baby named Mithra who is fighting a disease named Spinal muscular atrophy. The kid who hasn’t completed 2 years old yet, requires Rs. 16 crore to cure her condition within next month. Priya, in her video, suggested her followers and public to come forward and donate whatever they can.

“Rs. 16 crore is a massive amount to a middle class father. But together, we can. No matter whether you donate Rs. 1000 or Rs. 100 or Rs. 10. It will be handy for the parents of Mithra. I still believe in humanity and let’s make Mithra to go to school like every other child. Even if you can’t send money, share this video as much as possible which will help the parents to get the money they are in need” said Priya in her video and added the Google pay number of the parents in her description.

“Mithra Fights SMA Together we can make a difference! I’ll keep posting details and updates on my insta story every single day till the last day of this campaign. Every single rupee you contribute matters! GPay – 9500623402Pls share this video and help us reach more people.” read the caption of Priya’s post.

A generous follower commented on the post of Priya saying that he is going to make a donation of 16.5 K which he saved all these days. He said that he can arrange 20K within tomorrow and asked Priya for an address to send the money as he doesn’t have Google Pay facility. “Hi, people like you make this world a better place.” said Priya in her reply comment and suggested him to get in touch with the organisers of Mithra’s operation. “Thank you beyond words” the actress said through her reply.

However. most of the other followers made obscene remarks on the actress’s cloth. They said that the actress is wearing a “Lungi” and tried making fun of it through their comments.

In a way of shutting down such commenters once and for all, Priya replied to a follower saying “On a normal post I have a better humour sense than yours, there was so much in this video and wow ! you noticed my pants. Joke is on you brother”

Further, Priya went on to share both the comments in her story and said “There are two kinds of people, ipdi onnu, ipdiyum onnu types”

Actress Radika Sarathkumar who is known for her versatile performances in Tamil film industry since very long time, is also known for her Television...

The makers of “Comali” movie managed to grab the headlines in Tamilnadu amidst the waves that are being created by the Bigg Boss show...