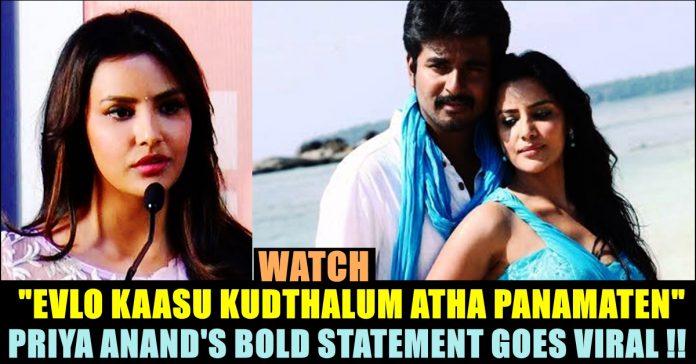 Priya Anand’s Bold Statement About Acting In These Kind Of Advertisements !!

Priya Anand’s latest statement on acting in fairness cream advertisements has won the hearts of netizens. The actress has said that she won’t act in a fairness cream advertisement and the reason she stated made the micro blogging social media users to laud her like never before. Priya Anand, one of the most talented actress in Tamil film industry, rose to fame through films like Vamanan, Ethir Neechal is also an experienced actress among very few. Unlike many heroines who faded away, Priya still sustains in the industry with her versatility in the movies she acts.

In a latest video interaction, the actress had said “I won’t do fairness advertisements. Even in my modelling times, I haven’t done any. In our place, there is a misconception on what actual beauty is. They think that being fair is being beautiful. But my parents didn’t raise me that way which gave me a lot of confidence” said Priya in the video which is going viral in Twitter.

“We are all South Indians. We all have a dusky skin tone at any level. That is also a beauty. Be it anywhere in the world, we won’t find any kind of people with the spark in the eyes of South Indians and their skin tone. Sridevi, a biggest bollywood heroine, belongs to South India. Deepika Padukone, one of the biggest stars in our country is also a South Indian. People giving importance for fair skinned people without considering the features. And what I find as more absurd is, South Indian filmmakers bringing heroines from Bollywood and trying dusky makeup on her to make her look like a South indian. Those kind of people must have gone nuts. Its just very silly. I will never do fairness ads, no matter how much money they offer” the actress said.

This is why we love you, admire u @PriyaAnand
This attitude 👏👏
Keep this fire always in ur heart 💓
God bless pic.twitter.com/mQI92Kyj1C

The actress who became aware of this particular video going viral, came up with a reply saying “Brown Girl Magic ❤️”

As said before, Priya won many hearts with this clipping of her doing rounds. Check out some of the reactions, the actress is receiving :

Loved watching your movies ..now you have a great attitude like you said wish directors are more choosy about selecting local born actors 🤟all the rbst for your future endeavours

On the work front, Priya Anand is going to be seen in Sumo which has actor Shiva in the lead role. She was last seen in Adhithya Varma which is a remake of Telugu blockbuster Arjun Reddy.

What do you think on this bold statement of the actress ?? Comment your views below !!