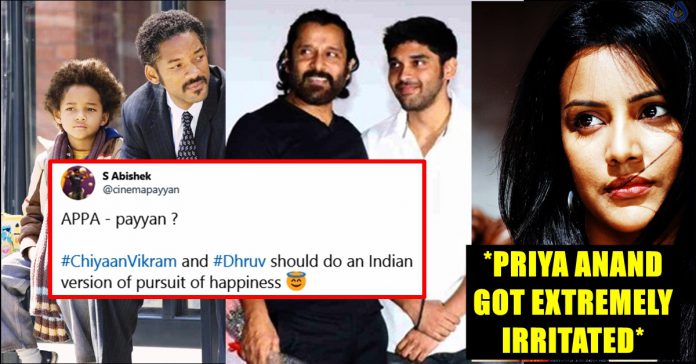 Adithya Varma is an upcoming Indian Tamil-language drama film directed by Gireesaaya (in his directorial debut) and produced by Mukesh Mehta under E4 Entertainment. Girisayya, who assisted on the original Telugu film, came on board as director, and Ravi K Chandran as cinematographer. The film stars newcomer Dhruv Vikram and Banita Sandhu in the lead roles while Priya Anand appears in a supporting role.

The film’s trailer released today and the audio launch took place by having actor Vikram along with Dhruv. The trailer shows the film having the similar pattern of original “Arjun Reddy”. In the audio launch, both Dhruv and Vikram shared few memorable moments together by singing and performing. Vikram asked Dhruv to perform one of a scene from “Adhithya Varma” and in return Dhruv asked Vikram to share one of a scene of his epic film “Sethu”. Both sung a song from Adhithya Varma to entertain the audience.

Their presence in the stage made many fans go gaga as they both looked like brothers. Many lauded the way Vikram taking care of his son’s career despite of his hectic schedule. On seeing them together, popular movie reviewer, Abhishek Raja, in his tweet said that they should do the Indian version of “Pursuit of Happyness”.

APPA – payyan ? #ChiyaanVikram and #Dhruv should do an Indian version of pursuit of happiness 😇 pic.twitter.com/3Ygyf7SDlG

The Pursuit of Happyness is a 2006 American autobiographical drama film based on entrepreneur Chris Gardner’s nearly one-year struggle being homeless. The film had Will Smith and his son Jaden Smith in the lead roles and Jaden played the role of a 5 year old son of Will Smith in the movie.

As Dhruv is now 24 years of old, there is no possibility for him to do the role of a kindergarten kid. Twitter users who saw the tweet of Abhishek Raja completely, found it completely absurd and started trolling it. Priya Anand, the actress who is doing one of the lead in Dhruv’s debut film Adhithya Varma couldn’t tolerate the tweet of Abhishek as well.

Check out her reaction to the tweet of Abhishek :

Check out some of the other replies for the tweet of Abhishek :

Adhithya Varma is expected to be released on November 8th across Tamilnadu. “Arjun Reddy” which was remade in Hindi as “Kabir Singh” became a blockbuster and collected more than 250 crores and became one of the highest grossed film of the year.

What do you think on Dhruv and Vikram doing Pursuit of happyness ?? Comment your views !!