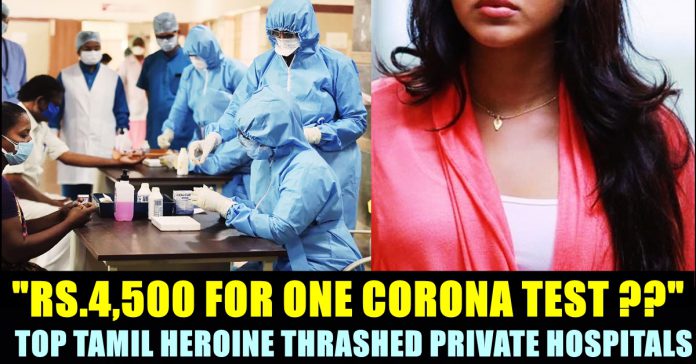 Though our country is slowly marching towards normalcy, the number of COVID 19 positive cases are still increasing in daily basis. So far 99, 773 people were died due to the infectious virus with 63 lakh active cases. More than 10 lakh people died across the world due to the virus. 5000 plus active cases are being reported in Tamil nadu in daily basis. On 2nd of October, State Kerala saw the highest single day spike and imposed Sec 144 in Thiruvananthapuram.

The state has recorded 9,258 positive cases and 4,092 recoveries, the highest single-day spike and recoveries respectively. The infection count touched 2,12,499 while the death toll rose to 791 with 20 new fatalities. Now, Kerala based actress Amala Paul who predominantly works in Tamil film industry, has came up with a social media post slamming the private hospitals for minting money using this COVID 19 situation.

All of our plans to improve our financial status in 2020 tumbled in front of our eyes due to this Lockdown, implemented by our government as we are having a deadly virus which killed more than 10 lakh people across the world waiting at our doorstep. Many people are looking for alternative ways to stay afloat in this Global pandemic.

We are even witnessing people who are switching careers altogether to survive. Now, unlike other female celebrities who remain mum about social issues, Amala Paul has came up with a bold statement against private hospitals for minting money using the situation.

Actress Amala Paul who is known for being bold in on and off screen was last seen in Director Rathna kumar’s “Aadai”. Her personal life and the decisions she makes has always been a concern to media and public. The actress who rose to fame among Tamil audience through her “Mynaa”, went on to appear in a number of successful films such as “Velai Illaa Pattadhari”, “Thalaivaa” etc. She is also one of the many actress who is very much active on social media platforms where she raised her voice against injustice.

Initially, a sting operation of Times now media has revealed the “Cash for cure” system in private hospitals of Chennai. Videos they released showed a number of hospital authorities explaining about the different types of charges for a COVID 19 patient. A series of videos that got released by the news media portal evidently showed that the hospitals are charging Rs. 1 Lakh for 1 day of hospitalisation.

Previous articleKedar Jadhav Is Trending Nationwide !! You Must See Why
Next article“If You Have Guts, Come For A Live Debate” Makers Of Ka.Pae Ranasingam To “Blue Satta”

Tamizh Selvan is in the Indian Army. He hails from the Theni district in Tamil Nadu. It so happens that Tamil Selvan had come...