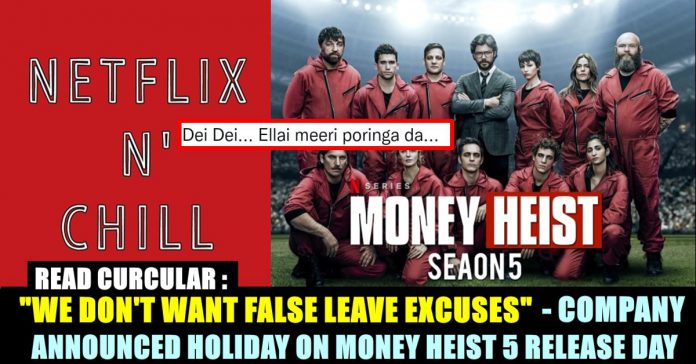 Abhishek Jain, the CEO of VerveLogic has issued a notification to its employees stating “Netflix and Chill holiday” on the 3rd of September 2021 on the account of the release of the Money Heist season five.

With offices across the UK, USA, UAE and head office at Jaipur, in Rajasthan, Vervelogic values both its clients and employees. The company has issued a notification on 26th August 2021. The company has decided to shut down on the 3rd of September 2021 on the account of the release of Money Heist season 5 to avoid mails of false leaves and mass bunk.

The date of release of the Money Heist season 5 was announced by Netflix India. On this note, the fanatics of the most popular series Money Heist are counting the days to enjoy watching season 5.

The following is the notification given by VerveLogic.

“The management has decided to declare a ‘Netflix & Chill holiday’ on 3rd of September 2021 on the release of Money Heist 5. We have taken this initiative not just to save an attack on our emails with false leaves. See mass bunks & numbers being switched off but because we know ‘Sometimes Moments of Chill be The Best Pills for Energy At Your Work”

“So Grab the popcorn. Freeze On Your Couch and Be Prepared to Wave a Final Bye to Our Most Loved Professor & the Entire Caste.” And the notification continues by thanking the employees who worked from home during the Covid-19 pandemic.

This is called publicity without spending a penny

i don't think he knows its not the final yet, its part 1 of final….

Hope they know the real meaning of ‘Netflix and chill’. And all the best waving bye to the entire ‘caste’ 😐

More and more people need to be aware of the origins of thr pop culture term "Netflix and chill" especially what is commonly implied by CHILL. If they actually do & are still offering employees a day off, then they are breaking new ground pic.twitter.com/gAldBXtGlD

That’s for company publicity .. these corporate crooks will try to get attention in everything…

Previous articleCase Filed Against A Youth For Harassing Women Who Visited His Photo Studio!!
Next articleFan Lauded “Kasada Thapara” After Watching The Film Through Piracy !! Producer Venkat Prabhu Replied