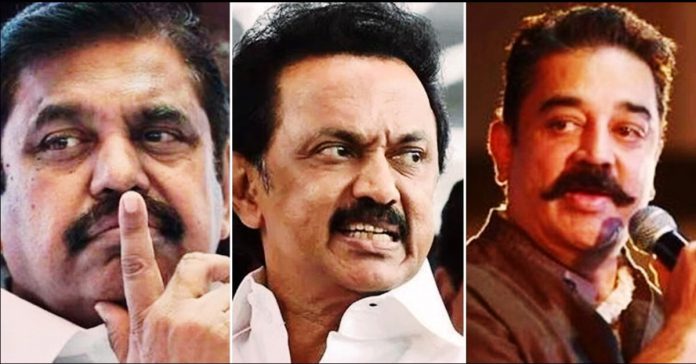 Ahead of the Tamil nadu assembly elections, various kind of media portals including private news channels, print media are conducting opinion polls across the state to discover the winners of the upcoming election which is scheduled to take place on 6th of April. Now, a poll conducted by a private Tamil news channel created controversy among political analysts in social media platforms as it was reported that the channel has conducted poll to a very less number of people.

With just two weeks to go for the assembly elections in Tamil nadu, several private channels are releasing the results of the opinion polls they conducted across the state. A recent poll of Democracy Network and Ungal Kural said that the AIADMK led alliance has an edge over the DMK alliance due to the strong performance of them in the Kongu region and the incremental accrual of votes due to its alliance partners in the Thondai region.

As per the opinion poll, AIADMK will win 122 seats, closely followed by the DMK at 111 seats. The poll said that there is a strong contest between the two parties. Meanwhile, a poll conducted by Puthiya Thalaimurai Channel has created a controversy.

It was reported that only 5000 people were asked to respond to the opinion poll among the 6 crore 29 lakh 23 thousand and 512 voters in Tamil nadu as the state was divided into 5 zones with 20 districts per zone and with one assembly constituency per district to conduct the poll. In one constituency, the poll was conducted in 10 places with 25 people per place, said reports.

As the poll was conducted to very less number of people, the statistics released by the channel couldn’t be believed, said statistical analysts, according to reports. It was also reported that the poll was conducted between February 18- March 15 which is prior Sasikala’s announcement on quitting politics. Many turn of events took place in the Tamil nadu politics including the announcement on election manifesto, candidates list etc after Sasikala quitting politics.

The questions which were structured were also created controversy in the social media platforms. In the question which was asked on whom the people wants to become the chief minister, the options included Sasikala along with Kamal Haasan, Stalin, Edappadi K Pazhaniswamy. Many other such questions left the netizens to criticize the poll. Few even stated that the questions are biased. Confusing questions, survey with less number of people made people to question the reliability of the private channel’s poll.

A report on a English lecturer named Chandhini resigning her job after being asked to remove her hijab is making headlines across the country...

A couple walks out of a hospital, casually chatting with each other, while another woman walks close to them. As the couple reach the...