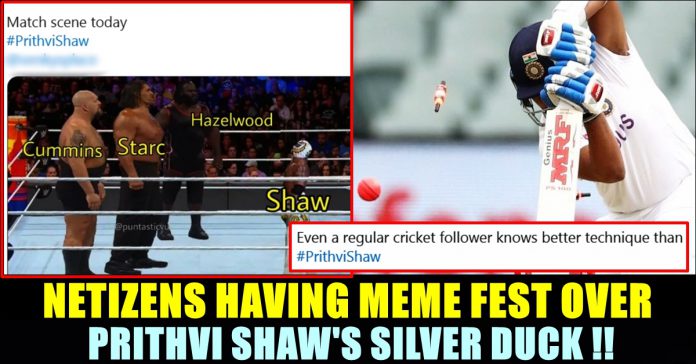 Prithvi Shaw who opened for team India in the first test match against Australia, is trending in the micro blogging social media site as he got out for a duck in the very second ball he faced. Indian captain Virat Kohli, after winning the toss, decided to bat first and sent Prithvi and Mayank Agarwal as openers.

Many cricketing experts and fans including Allan Border and Sunil Gavaskar expected Kolhi and Indian team to go with Shubman Gill to pair with Mayank Agarwal as a opener for India for the first match of the four match test series. But India chose to go with Shaw and the play didn’t go accordingly as Australia’s pacer Mitchell Stark exposed him in the first over of the match.

Starc who is known for his records with pink ball, started with a length delivery angling across the right hander which was defended well by Shaw. In the next ball, the left hand pacer pitched it slightly fuller a tad wide off the stump and Shaw decided to drive the ball towards off side. As he didn’t move his feet, got an inside edge and dragged the ball onto his stumps.

This was Prithvi’s first duck in test cricket. Users of social media started flooding the feed with memes and trolls against the 21 year old lad by pointing out his lack of techniques and the way he batted in the warm up game.

Meanwhile those who saw Prithvi Shaw as future Sachin pic.twitter.com/YJaZShmV3M

Even a regular cricket follower knows better technique than #PrithviShaw

And how many times commentators say don't play away from body. #INDvsAUS

This is what i always talk about this guy is a duck mechine. but for indian managrment he is sachin sehwag dravid laxman lara bradman etc etc #PrithviShaw #pant #RishabhPant #Shubmangill #viratkholi #INDvAUS #starc pic.twitter.com/Dm5FnHF5M8

Behind the Scene : Secret revealed, How #PrithviShaw select in the Team XI #INDvAUS pic.twitter.com/zzLY7OKOpa

However, few fans wanted Internet to spare Shaw as he is just starting his career. Meanwhile, a number of cricket followers advised Shaw to play enough first class matches to learn techniques. Comment your views on these reactions !!