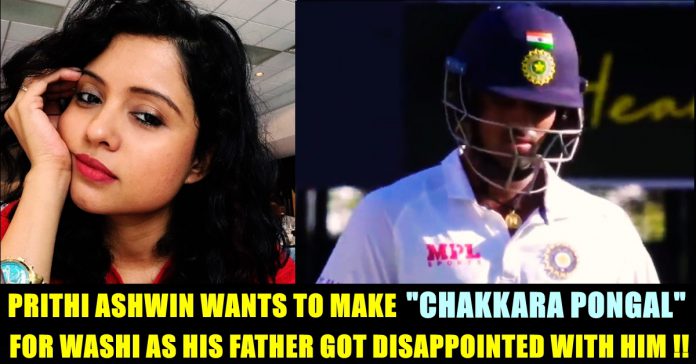 Prithi Ashwin who was pretty much active in the micro blogging social media site during India’s tour in Australia, was engaging her followers with tweets filled with love for team India. A tweet she posted after Ashwin’s fighting knock in the third test went insanely viral as she revealed how her husband struggled in the morning of day 5. She also wrote a detailed article for Indian express narrating her inner emotions during Ash’s heroic innings.

“The man went to bed last night with a terrible back tweak and in unbelievable pain. He could not stand up straight when he woke up this morning. Could not bend down to tie his shoe laces. I am amazed at what @ashwinravi99 pulled off today.” Prith Ashwin wrote after India drew the third test with the help of Ashwin and Vihari.

The man went to bed last night with a terrible back tweak and in unbelievable pain. He could not stand up straight when he woke up this morning. Could not bend down to tie his shoe laces. I am amazed at what @ashwinravi99 pulled off today.

Throughout the tournament, she was doing commentary in twitter in her own way. After winning the test at Brisbane, in a way of replying to Tim Paine who called her husband to “Gabba”, Prithi wrote “SEE YOU AT THE GABBA MATE.” and the tweet went insanely viral among the fans.

SEE YOU AT THE GABBA MATE.

Washingtom Sundar, Natarajan, Rishab Pant, Shubman Gill, Mohammad Siraj, Shardul Thakur, Navdeen Saini are some of the youngsters in the winning team who showed grit and character to clinch the trophy in the Australian soil. “We came. We believed. We conquered. #TeamIndia” said Sundar through his Instagram account after winning the historical match. He took crucial wickets and played two outstanding knocks in the final test.

We came. We believed. We conquered. #TeamIndia 🇮🇳 pic.twitter.com/J2Z3q8pp9Z

Replying to this tweet, Prithi Ashwin said that she will make “Chakkara Pongal” for him referring to the commentary made by Harsha Bhogle when the 21 year old was in crease. The commentator recommended some extra Pongal for Washington Sundar to Mrs. Sundar after knowing about the father’s disappointment over his son for missing a century in the first innings. After Sundar scored 62 in the first innings, reports emerged saying that Sundar’s father was disappointed over his son for not converting it to a century.

“I am disappointed he did not get a 100. When Siraj came, he should have hit fours and sixes. He is capable of that. He should have gone for sixes. He could have gone for pulls and big hits. Perhaps, he thought of trying to come close to Australia’s total as the lead was very less,” said the senior Sundar to media and added that his son is the youngest player to score century in the first division league. “He is naturally a opening batsman and scored lots of runs against new ball. At the age of 14, he scored century while opening” he said.

Mrs Sundar, extra helping of your Pongal for Washington please….

On seeing the twitter post of Sundar, Prithi Ashwin replied to him saying that she will make Chakkara Pongal for him. “I’ll make chakkara pongal for you!” her reply read.

I'll make chakkara pongal for you!

Replying to her comment, Washi wanted her to add less sugar to it and Mrs. Ashwin said that she will add jaggery instead of sugar.

Check out some of her other tweets below :

"Why is the ball hitting him again and again? They don't like him?" My girls are upset and want to go to the stadium and check on Pujara uncle rn. 😭

Good morning. How is everyone feeling on Day 6?