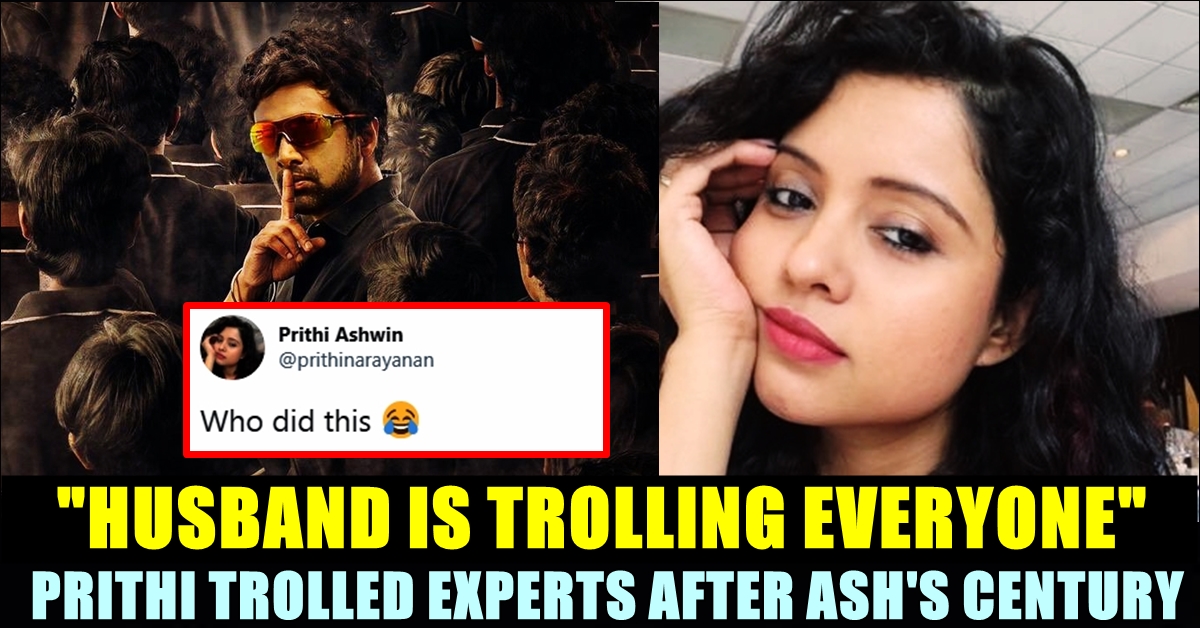 Ravichandran Ashwin became the talk of the town after delivering a terrific century in the second innings of India’s second test match against England at his home ground Chepauk, Chennai. Entire internet came up with tweets lauding the 34 year old who already claimed legend status with his batting and bowling skills. Prithi Ashwin, wife of the all rounder, came up with a number of adorable tweets to celebrate her husband’s terrific knock and the most special one is a photoshopped picture of “Ashwin” as “Vaathi”.

A moment to cherish forever! @ashwinravi99 gets his Test💯 in Chennai and Md. Siraj erupts in joy. The dressing room stands up to applaud.🙌🏾 #TeamIndia #INDvENG @paytm pic.twitter.com/ykrBhsiTbl

Check out some of the tweets appreciating Ashwin below :

Class 100 👏👏👏 Simply outstanding @ashwinravi99 take a bow 🙇‍♂️.. showing everyone how to bat and bowl on this track.. well done @BCCI @StarSportsIndia #INDvsENG

Let me tell you a Kutty story #Ashwin #INDvsENG pic.twitter.com/K6hbfjhTOS

What do you do when people undermine your brilliant five wicket haul by calling the pitch bad? Go make a 100 with the bat in the next innings and show ‘em how it’s done! Ashwin… bawwwssssss innings! 💪🏽💪🏽💪🏽💪🏽👏🏽👏🏽👏🏽👏🏽👏🏽

Ash Anna teaching 'em how it's done on a raging turner at the Chepauk 😎#INDvENG #Master @ashwinravi99 pic.twitter.com/hpO8lMCl5M

They – Pitch is naat good for batting,nno way can bat on thees.

Want a crash course in batting and bowling on spin-friendly pitches? Meet Ashwin Sir. Tutorials available in Tamil, Hindi and English. New batch starting after this series, special discount for those who want to learn and not find excuses

What a knock @ashwinravi99. A well deserved treat for the chennai crowds. Now make it a 10fer for the game and wrap this game up in style 😎

What an outstanding performance from @ashwinravi99 . The fifer followed by a brilliant hundred in the second innings . Top class 🙌🏻

U should show it Out !!
Sweat it out
Burst it out

Ur insults
Ur passion
Ur love
&
Ur anger !!

Ashwin bowl: It's a bowling #Pitch
Ashwin Bats: It's a batting #Pitch

Prithi Ashwin, wife of the cricketer came up with a special tweet for her husband’s knock. When he scored a 50, Prithi, indirectly mentioning the comments of experts who said that it is a pitch made for spin, wrote “Husband is trolling everyone” by adding a laughing emoji.

Husband is trolling everyone 😂 #win50

When he scored the century, she tweeted a heart emoji and it garnered 14 k plus likes so far.

“Too overwhelmed to say much. Let’s wrap up this game now.” she said in her next tweet and added the picture of Ashwin photoshopped as “Vaathi” to ask who did it.

Too overwhelmed to say much. Let's wrap up this game now.

After taking five wickets in the first innings, many criticized the “Chepauk” pitch by saying that it is a spinner friendly “bad” pitch. However, Ashwin has displayed a master class on how to bat by hitting 14 boundaries and one six. Now, he already took a wicket in the second innings of England and is highly expected to pick four more wickets to become a player who scored century and 10fer in a same match.