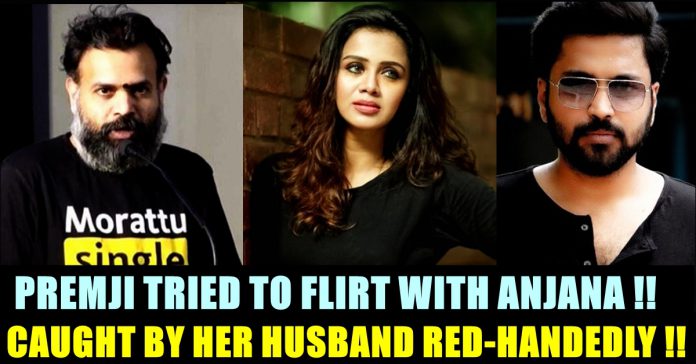 Actor Chandran and VJ Anjana Rangan have welcomed a new member to their family few months back. They turned proud parents to a baby boy which made the anchor to take a break from her professional career. The couple named their son as Rudraksh. Now the VJ is back to her career and became very much active in her profession and as well as in social media platforms.

Anjana who enjoys quite a huge fan following in social media due to her unique way of anchoring in Sun Music as video jockey, did shows for the music channel for nearly 10 years. Yesterday she posted a picture from her recent photoshoot, in which she slayed her followers in black tee and with beautiful brown eyes.

On seeing this picture, Premji Amaran, popular comedy actor and music director posted a GIF comment express his admiration towards the look of Anjana. Here’s the comment he posted :

To our surprise, Anjana’s husband and “Kayal” hero Chandramouli, immediately responded with a hilarious comment. He took time to search the famous GIF of Vadivelu from “Kannathal” movie where he would ask for sickle to threaten a man in front of him.

Chandramouli, after featuring in short films and music videos, Chandramouli made his feature film debut with Prabhu Solomon’s romantic film Kayal. He also featured in Venkat Prabhu’s “Party” which is yet to be released.

However, the friendly banter didn’t end there. Premji replied to the GIF by posting another GIF of Vadivelu getting nervous.

Check out the further conversation here :

Anjana too joined the conversation and trolled Premji by posting a clip of Vadivelu comedy.

This GIF war between the trio made many of the twitter users laugh among which one of them reacted to it by saying “Vadivelu for life….,,😆”

Anjana and Chandramouli knew each other for years, the couple started liking each other only in 2015 when Chandran met her after years at the Edison Awards. On the work front, Chandramouli’s “Thittam Pottu Thirudura Kootam” movie is ready for release and the trailer was released recently. Premji Amaran and Venkat Prabhu has sung a song in the movie.

What do you think on this hilarious conversation between them ?? Comment your views here !!

Successful Indian team who are in the second place are taking on Sri Lanka in their last league game in this ongoing world cup...