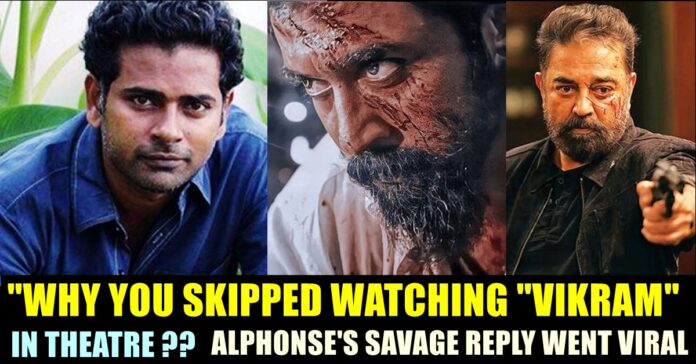 Ever since Kamal Haasan’s “Vikram” got released in OTT space, several number of online users has been watching the film for the first time and has been letting their views about the film through their respective social media handles. KGF Director Prashanth Neel, movie critic Anupam Chopra and others are some of the notable personalities who watched “Vikram” only after its OTT release. Now, Director Alphonse puthren of “Premam” fame has joined the list and penned his views about the film after watching it in Disney Plus Hotstar. 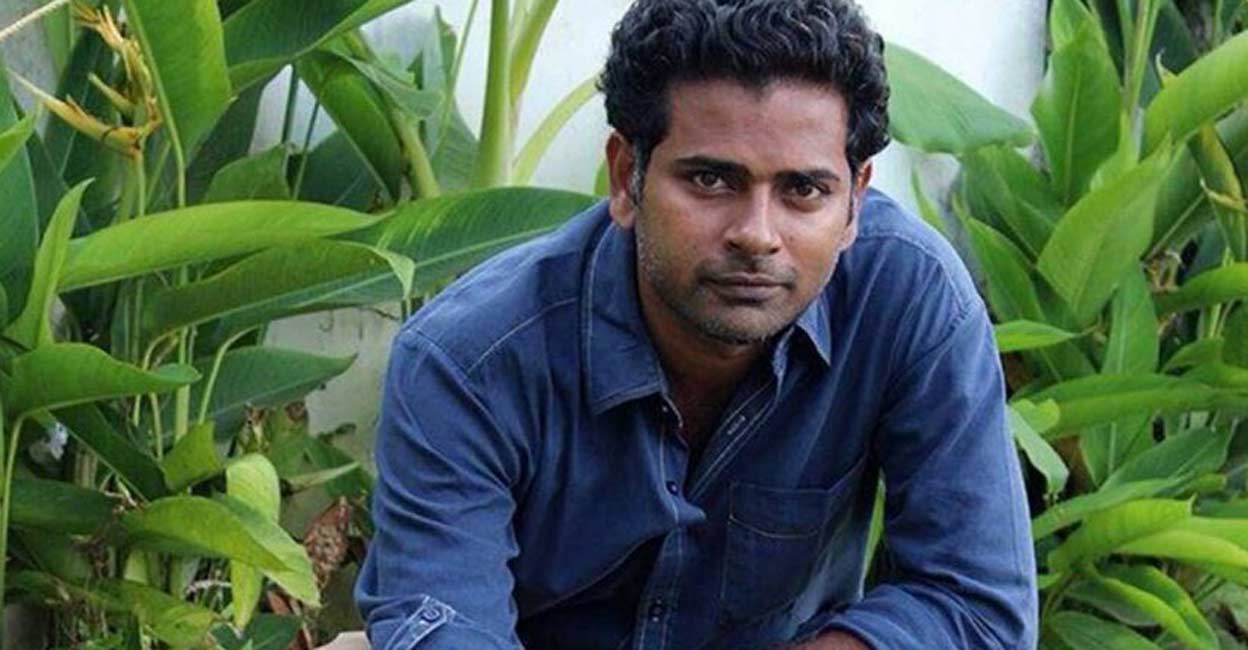 “Vikram”, produced by Kamal’s “Raaj Kamal Films International”, has reportedly collected more than Rs. 450 crores across the world since its release date and is still running in theatres despite of its OTT release. It is notable that the film made a pre release business of Rs. 200 crore including satellite rights and is considered as the most profitable film in the history of Tamil cinema.

Many fans lauded Lokesh Kanagaraj for pulling off a project like “Vikram” with multiple star cast and engaging screenplay. The film gained repeat value among the audience and many fans believed that “Vikram” is a best theatrical experience in recent times. Having said that, we can’t wonder why fans are confronting celebrities who tweet or post about the film after watching it in OTT. 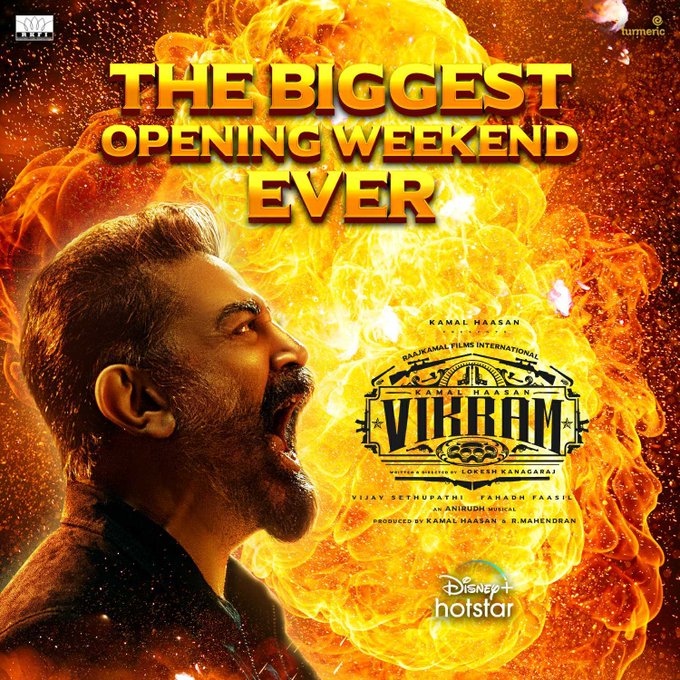 Director Alphonse Puthren who identifies himself as a biggest admirer of Kamal Haasan, on Monday, came up with a post about the film in his social media handles after watching it in OTT. The filmmaker said “I liked Agent Tina, Agent Uppuliyappan and Agent Vikram. Sandhanam was huge and heavy equaling the Mass of Thanos ( I liked Vijay Sethupathi after a long time as Sandhanam ). #Rolex was kick ass. Agent Vikram’s Avatar in the last scene was refreshing” about the film.

“Amar helps us to understand the whole plot written by #AgentVikram. ACP Prabhanjan was neat and sleek. Police Chief Jose creates the impact he needs to. Respect and love to the Cast and Crew of #Vikram. 🙂🙂🙂🙂” he added.

Amar helps us to understand the whole plot written by #AgentVikram. ACP Prabhanjan was neat and sleek. Police Chief Jose creates the impact he needs to. Respect and love to the Cast and Crew of #Vikram. 🙂🙂🙂🙂
– Alphonse Puthren

On seeing the filmmaker’s tweet, an enthusiastic fan came up with a reply questioning why Alphonse missed to watch the film in big screen. Replying to him, Alphonse said “The reason is when I go out to watch a film in Theater, the editor in me tells I haven’t finished my work. Then when I’m done with editing.. the director In me tells that the film is only complete halfway.. so the director gets back and when he finishes his job.. the Color corrector in me wakes up and tells me that I should sit for colour grading. on the way to colour grade.. the editor feels there is a lag and adjusts the timeline”

“Now the colour grader in me sits to correct the edited time. Now from no where the director in me will tell that, the editing is poor. Now the editor in me feels egoistic and
adjusts the timeline. So finally me as a person decides that l’ll watch Vikram in OTT.very simple” he added.

Check out the screenshot of his reply : 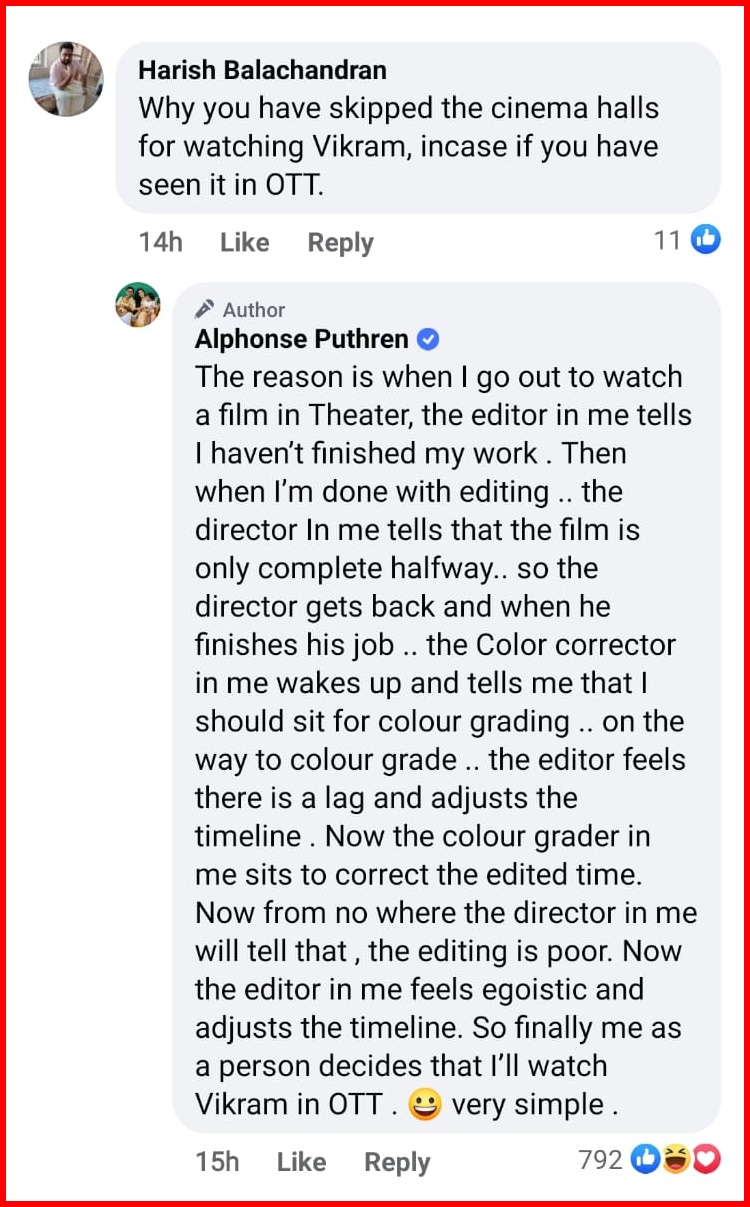 Alhonse is currently busy directing a film named “Gold” starring Prithvi Raj and Nayanthara. Alphonse who is closely associated with Kollywood’s Karthik Subbaraj and gang, is writing, editing, choreographing stunts, adding visual effects, animation and colour grading on his own. His last film “Premam” which got released 8years ago became a massive hit in tamil nadu and Alphonse is expected to direct more fims in future. 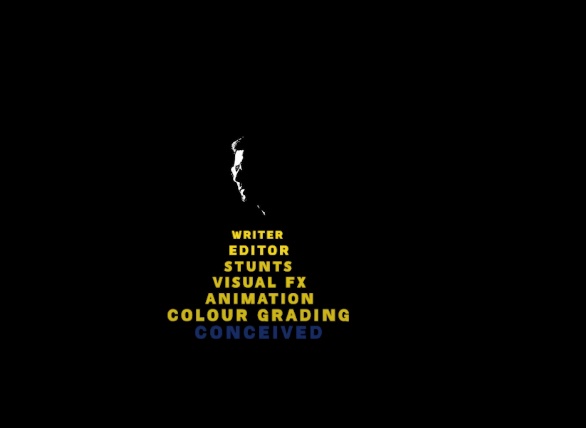 Here’s The Reason Why We Love Modi !! : You Will Start Loving Him After Reading This For Sure !!

Thuppakki, a film which is a biggest break for both Vijay and A.R Murugadoss, widely appreciated by the critics and by the audience for...