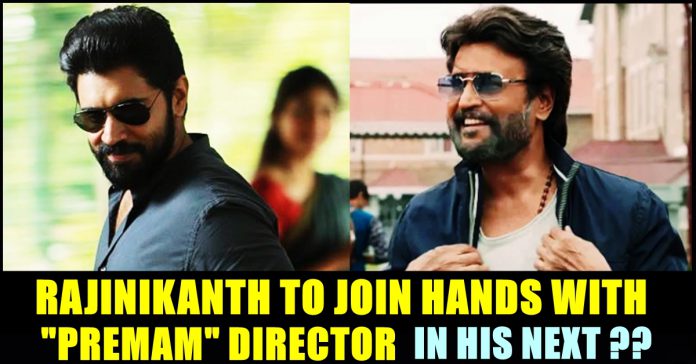 “Premam” Director Alphonse Puthren To Direct Rajinikanth In His Next ??

After making a final decision about his political stint, Superstar Rajinikanth is expected to act in more films after “Annaththe”. Earlier, it was rumoured that “Kannum Kannum Kollayadithaal” fame Desingh Periyasamy who identifies himself as an ardent fan of the Super star actor has narrated a story to Rajinikanth. However, the filmmaker brushed the buzz off by posting a tweet. Now, director Alphonse Puthren of “Premam” fame has expressed his wish of directing Rajinikanth and fans are hoping for the project to elevate to the next level. Alphonse made it public while replying to a fan in his Facebook space.

After the shooting of “Annaththe” got affected due to COVID 19 virus, Rajinikanth decided not to enter politics. The actor says that he sees the interruption as a warning from the God himself. Nearly, a month after this announcement, Sun pictures officially announced that “Annaththe” will be releasing for “Diwali festival. So far, there is no official word on the next project of Super star Rajinikanth.

Alphonse Puthren who gave a blockbuster film titled “Premam” in the year 2015, is yet to release his next film. Recently, it was reported that the filmmaker is going to make a film named “Paattu” by having Fahad fazil and Nayanthara in the lead roles. Alphonse is pretty much active in social media platforms and has been sharing posts of his kind to his 2 lakh plus followers.

Most recently, a follower of his asked him whether he would direct a film by having Rajinikanth in the lead role. “I don’t know if you would read my comment. I want to see Rajinikanth in your film. Do you have a story for him ??” the fan questioned and the filmmaker was kind enough to take time to write an elaborated reply to him.

“I do have a story for Rajini sir. I have tried to meet him several times after completing “Premam”. Still I couldn’t meet him. I would definitely make a film by having Rajinikanth in the lead role if it is the fate. Let’s wait for the correct time. I have a hope that God would take care of a job if we complete it half way through. I think God is busy destroying COVID 19. Will try after the situation settles” Alphonse said in his comment by writing “Rajiní sirukku katha vachirukken. Aana premam mudinju naraya vaatti meet panrathukku try pannen. Ithuvarakkum Meet panna mudiyala. Naan Rajini sira vachu Padam pannanumnu yen thalayila ezhuthiyirukkuna athu nadanthe theerum. Neram correct aavattum. Naama paathi vela senjittomna meethi paathi kadavul paathuppaarunu oru nambikkai irukku. Kadavul CoVID azhikkaruthula busya irukkarunu nennakkiren. Athukkaprom thirumba try panren.

Check out the screen shot of his reply below :

As soon as the filmmaker made the reply, it went viral among the fans of Tamil cinema. Popular movie reviewer Abishek Raaja shared the screen shot of Alphone’s reply and tagged Soundarya Rajinikanth in order to make the director and actor to meet.

However, we have to wait till the meeting between Rajinikanth and Alphonse to take place to get an official word regarding whether the project is going take off or not. What genre would the film be if the duo join hands together ?? Comment your views below !!

Previous articleRestrictions Imposed Against “Anti Indian” Again !!
Next articleTamil Internet Slammed Samantha For The Role She Played In “The Family Man 2” !!

“Planting Tree In Your Own Villa Is Not Social Concern” – Vivekh Replied To The Criticism Faced By Vijay !!

As soon as Vijay uploaded the pictures of himself planting the sapling in his house to complete the challenge of Telugu Superstar Mahesh Babu,...