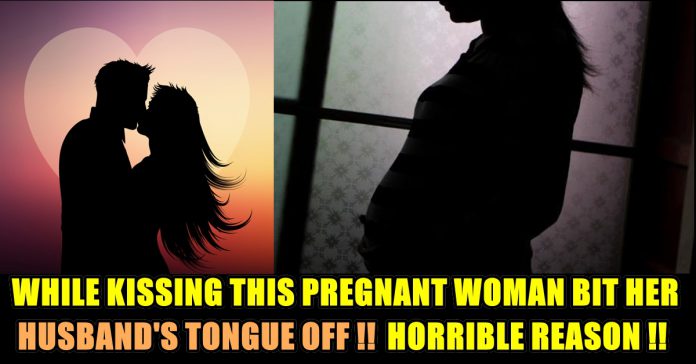 A pregnant woman in Delhi bit off half of her husband’s tongue while kissing him, the police said on Sunday.

The incident was reported from outer Delhi’s Ranhola on Saturday night.

According to locals, the woman, who was eight months pregnant, was not happy with her 22-year-old husband and felt he wasn’t good-looking.

The couple often used to fight and had compatibility issues, the police said.

According to the police, the couple had an altercation but later patched up. However, the next time she kissed him she bit off almost half of his tongue. The victim’s father informed the police about the incident.

The police said that even though the man underwent a surgery at Delhi’s Safdarjung Hospital, the doctors said it is difficult to say whether he will be able to talk again.

As per a PTI report, the woman was detained and a case against her was registered under Section 326 of the IPC, which pertains to voluntarily causing grievous hurt by dangerous weapons or means, punishable with life imprisonment.

Previous article“I Don’t Know What Attracted The Producer In My Dubsmash” Dhruv Opens For The First Time !!
Next articleJust By Drinking Her Own Urine, This Woman Lost 60 KGS !! SHOCKING !!

Shane Watson of Chennai Super Kings announced his retirement from the Indian Premier League. As soon as the news surfaced, fans of IPL became...

Anchor Bhavana who is known for her appearance in TV shows has came up with an emotional post on being body shamed by the...