Homes and roads were flooded across northern England and Scotland on Saturday and people were forced to evacuate their homes as Storm Desmond triggered widespread chaos.
The river Eden burst its banks at Appleby-in-Westmorland, Cumbria, leaving some properties under a metre of water. Around 180 families were forced to seek shelter at Appleby grammar school as Cumbria police declared a major incident in the region.
The village of Braithwaite was left “isolated” after the flooded river swept away the main bridge connecting it to the rest of the county. Geoff Mawdsley, owner of the Coledale Inn, where many locals were seeking refuge for the night, described a “raging torrent going into the village” and said that a wall of the Coledale High Bridge had “gone”.
Rain continued to fall overnight in Scotland, northern England and northern parts of Wales, and was likely to continue for a few hours yet, forecasters said.
The Liberal Democrat leader Tim Farron was among those stranded in the storm. He was driving through his Westmorland and Lonsdale constituency with a carload of four children when he got stuck on a heavily flooded back road. 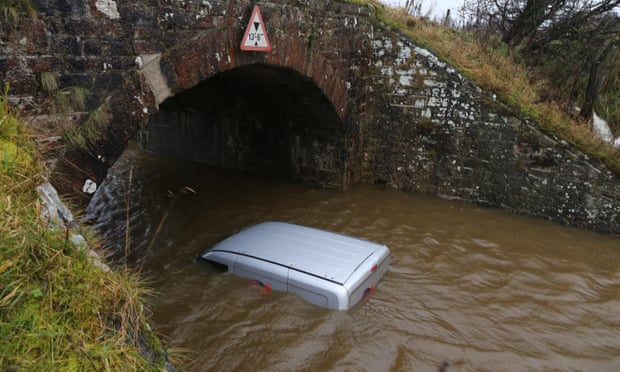 The effects of floodwaters during Storm Desmond seen in Bellingham. Photograph: Neil Denham/Barcroft Media
“We were getting our way round the various diversions and basically a river that isn’t normally there was there,” he told the BBC. “Having been around the patch today talking to people who have been directly affected, I now find myself in the middle of it. But we’re all safe, that’s the main thing.”

Farron said that friends with a four-wheel drive were on their way to rescue him and his passengers – although he said that his own vehicle was probably a write-off. “It is incredible weather. We have not seen anything like this. This is Cumbria for pity’s sake – we are used to challenging weather. This is beyond anything I can even recall.”

Cumbria fire and rescue service said the flooding was “unprecedented” as the Red Cross was called in to support residents. The charity set up a control centre to help coordinate its support to the flooding response.
Emily Parsons was at home in Cumbria, 10 miles outside Carlisle, as the water rose. She told the Observer: “At the moment I am standing in an inch of water in my kitchen. The garage has 6in of water in it and it’s about 10in high outside. We’re metres away from a river and it hasn’t breached yet but it’s teetering on the edge.
“We’re being told it won’t peak until the early hours of the morning. There’s nothing we can do but stand in the water and literally watch it rise.”
Lancashire fire and rescue service said it dealt with more than 300 calls for help in Lancaster and surrounding areas after flooding hit the Cable Street, Water Street, Chapel Street, Damside Street and St George’s Quay parts of the city centre.
Crews from all over the Lancaster and Morecambe district attended situations ranging from cars stuck in flood water, damaged electrics, flooding and road collisions and two fires.
Crews were also involved in a major operation to pump away water from the electricity sub-station. However, the floodwaters rose too quickly for them to prevent a power failure affecting much of Lancaster, Carnforth and Morecambe.
The emergency service itself did not escape flood damage. The fire station in Cable Street was evacuated and four fire engines suffered water damage.
A rescue mission for a horse stranded in a flooded field in Northumberland was called off for the night after emergency services had to rescue a person who waded out to help the animal. 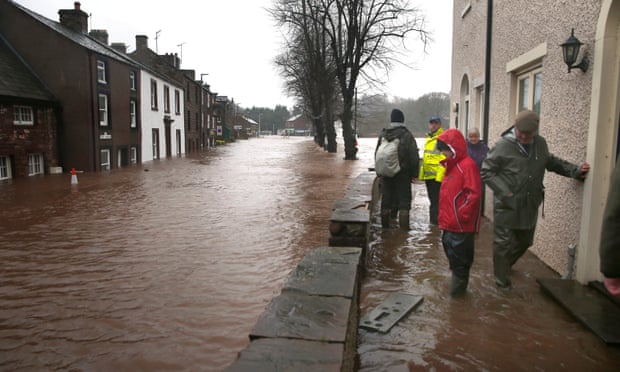 Flooded roads in Appleby in Cumbria. Photograph: Owen Humphreys/Press Association
Rail links and flights were also badly hit by the severe weather. In Ireland, dozens of flights were cancelled at Dublin airport.
Elsewhere a 90-year-old man, who died near Finchley Central station, north London, is believed to have been blown into the side of a moving bus by a gust of wind, a Scotland Yard spokesman said.
Forecasters have warned that these grim conditions will persist for several days. Rainfall of up to 100mm is likely in many parts, with some mountainous areas receiving up to 200mm over the weekend.
Motorists have been advised to make only essential journeys. Anyone driving in Scotland could face “extremely challenging conditions” with possible flooding, wind damage debris and more high winds, said Simon Williams, an RAC spokesman.
The Environment Agency spoke of continued risks as it issued 130 flood warnings. “Persistent heavy rain throughout Saturday and Sunday is expected to bring significant flood risks across Cumbria and Northumberland,” a spokesman said. 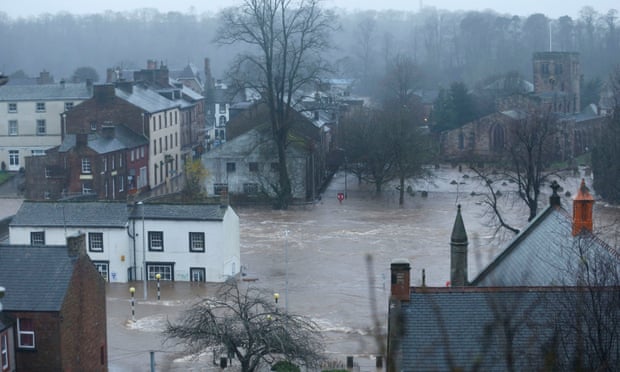 Flooding in Appleby wasn’t expected to peak until the early morning. Photograph: Owen Humphreys/Press Association
A Met Office forecaster said that the heavy rain and strong winds were expected to be prolonged: “Be prepared for the likelihood of flooding affecting properties and parts of communities. Watercourses may become dangerous, deep and fast-flowing.”
A total of 17 severe flood warnings, which indicate danger to life, were put in place in Cumbria and Northumberland. The Met Office issued its highest red warning for north-west England.
In Scotland, 80 flood warnings and alerts were issued while several main roads were closed because of landslides and flooding. At Altura, in the Highlands, a landslide dumped 200 tonnes of debris on the A82 between Spean Bridge and Invergarry. A 15-mile stretch of the road was closed and several areas of flooding between Invergloy and Letter Finlay caused further chaos.
Farther south, a lorry jack-knifed and hit the central reservation on the M8 at Bathgate, West Lothian, closing lanes in both directions. Other road closures in Scotland included the M90 between junctions 8 and 9, as well as the A85 and the A924.
In the north of England, the A66 was closed to high-sided vehicles between the junctions of the A67 near Bowes in County Durham and the A685 at Brough in Cumbria, as was the A19 Tees Viaduct in Middlesbrough between the A66 and A1046. 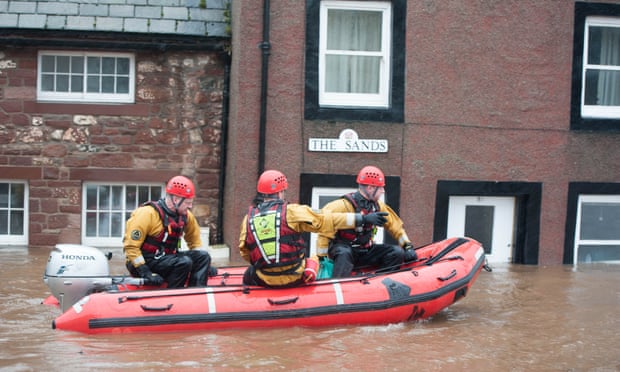 The market town of Appleby, Cumbria, has experienced some of the worst flooding. Photograph: WittWooPhoto/REX Shutterstock
In Scotland, most football matches were called off because of flooding while train services between Carlisle and Preston were cancelled.
Marc Becker of the Scottish Environment Protection Agency said: “River levels in the Tay, Clyde and Tweed catchments are already high and are expected to rise considerably in the next 24 hours.” On Scotland’s west coast, the ferry network Caledonian MacBrayne advised passengers to check the company’s website, app and Twitter feed before travelling.
The RAC’s spokesman said: “Motorists encountering floodwater on the road should think twice before trying to drive through. Water getting sucked into engines can cause catastrophic damage.”
The Environment Agency is urging people to check for updates online as its teams maintain local flood defences.
There is likely to be further significant flooding across parts of Lancashire, the west Pennines and the Cheviot Hills. The river Ouse in North Yorkshire is continuing to rise, with levels likely to be raised until Tuesday. There could also be localised flooding along the river Severn. The Environment Agency has put temporary defences in place in Shrewsbury, Ironbridge and Bewdley.
Source : theguardian.com
Previous articleSee How this ADMK Councillor did his job unlike other politicians
Next articleA Feel Good Whatsapp conversation between a Brother/Sister during the Chennai Flood