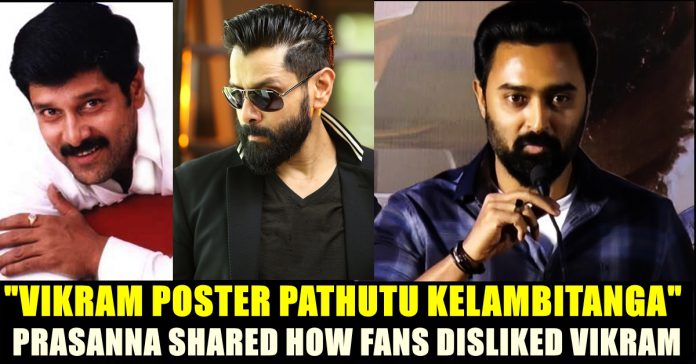 Prasanna shared about things he heard about actor Vikram from director Tharani. Actor Prasanna has seen better times in his career. From the silent-yet-sinister villain in Anjathey to a brainy banker in Naanayam, Prasanna has played some interesting roles in his career. Recently he appeared in Karthick Naren’s Mafia as an Antagonist.

It has been years since he played a film in which he was the single hero. Lately, he is taking up supporting roles and was seen in Vishal’s Thupparivaalan and Dhanush’s Pa Paandi. In addition to that, he also hosted a reality show in Sun TV. Prasanna is known for his kind heart and his passion for cinema. In a recent interaction with VJ Abhishek in sun music, the actor has revealed a thing about actor Vikram from a famous director.

Prasanna shared about a moment when he approached a producer for an opportunity in 2014 or 15. The producer said to Prasanna that he delayed for a come back in Cinema. “Only after two days, I came to realize that the producer felt that I was too old for a come back. On the day I decided that what we deserve will come to us as Thalaivar Rajinikanth said” said Prasanna who went on to add an incident about actor Vikram.

“There is a film called “House Full” directed by Parthiban sir. Directors Radhamohan sir and Dharani sir went to watch the film in thyagaraja theatre when they are assistant directors. When they are about to buy tickets in ticket counter, there was an image of actor Vikram placed below the counter in a poster. A bunch of 10 people saw the image of Vikram and left the theatre by believing that his movie will not be good. Dharani sir shared this incident with me. A man with that kind of market, is now an inspiration for many. So we can’t predict what cinema will do to an individual. Vikram sir is a biggest inspiration for me in my life. We have to keep aspiring by having these kind of actors as inspiration. It will happen if we keep working hard. All will change in one friday” said Prasanna. (Also Read : Prasanna Thanked The Meme Creator For The Love He Is Receiving Now !! Check What He Has To Say !!)

This particular clip of Prasanna talking about Vikram is doing rounds in social media platforms with various kind of captions. Check out some of them below :

This was spine chilling to hear https://t.co/lID6eoTUP2

Comment your views on the growth of Vikram and Prasanna’s perception towards the actor !!

Previous articleChinmayi Warned Girls About The Fake ID Of Her Husband !!
Next articleHeroine’s Insensitive Gesture Towards CoronaVirus Sparked Outrage !!