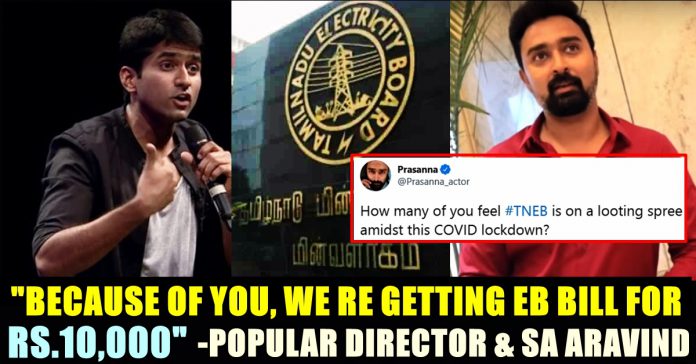 Since the day actor Prasanna posted a tweet about Tamil nadu Electricity board and brought to the attention of social media about the excessive bill amounts they are charging for the residents in Tamilnadu, many other people came up with similar accusations against the board. Now, director Arun Vaidyanathan who is known for making films like “Achamundu Achamundu”, “Kalyana Samayal Saadham” has came up with a tweet saying that he got bill amount of Rs.10,000 only because he is associated with actor Prasanna on a lighter note.

On 2nd of June, Tuesday, actor Prasanna who is known for his appearance in Tamil cinema has came forward to create awareness among his followers about the Tamilnadu Electricity board. Taking to his official twitter account where the actor enjoys nearly 9 lakh followers, Prasanna accused the Tamilnadu electricity board for looting money from public using this COVID 19 lockdown situation. He posted a tweet asking “How many of you feel #TNEB is on a looting spree amidst this COVID lockdown?”

Many people made similar complaints along with Prasanna. As his tweet got blew up, TNEB made a reply to the “Mafia” actor. “Prasanna hasn’t paid the bill amount of Rs. 13, 526 which is meant for March month. His accusation is highly condemnable. Current bill is being updated only two months once. It is being measured by parting the four month electricity consumption into two. Due to Coronavirus lockdown, we couldn’t measure the electricity consumption in Prasanna’s house” said TNEB.

Now, director Arun Vaidyanathan, in his tweet said, “I just saw my electricity bill. Shocked is the right word !!!! 10,000 Rs. Prasanna, Karu Naakku Thukkiri – the day you brought this to GOVT attention, they are penalizing everyone associated with you I guess 🙂 🙂 :)” . It is notable that Prasanna featured in both the film he directed in Tamil.

I just saw my electricity bill. Shocked is the right word !!!!

10,000 Rs.@Prasanna_actor – Karu Naakku Thukkiri – the day you brought this to GOVT attention, they are penalizing everyone associated with you I guess 🙂 🙂 🙂

Stand up comedian Aravind SA received similar amount as his EB bill it seems. “Adhe 10000, adhe electricity, adhe shock. Just got” he said in his tweet.

Adhe 10000, adhe electricity, adhe shock. Just got. Waiting for @rs_prasanna to soar past us with his excellence as always.

During the complete lockdown, members of Tamilnadu electricity board didn’t go to the houses of residents to note the reading. Instead they asked people to pay the bill amount of previous month. Now, after few relaxations, people are stating that authorities are forcing them to pay excess amount though they paid the bill for last month. Complaint regarding the same is being raised by several number of people. On the contrary, few stated that the bill amount is high due to the large consumption of electricity as people are spending most of their time in their houses for past two months.

In order to arrest the man who was accused of brutally raping, torturing a three-year-old girl in Gurugram Sector 66 on November 11, the...

Nayanthara is one of the very few female actors who rules Tamil film industry for more than 15 years. Being the highest paid...