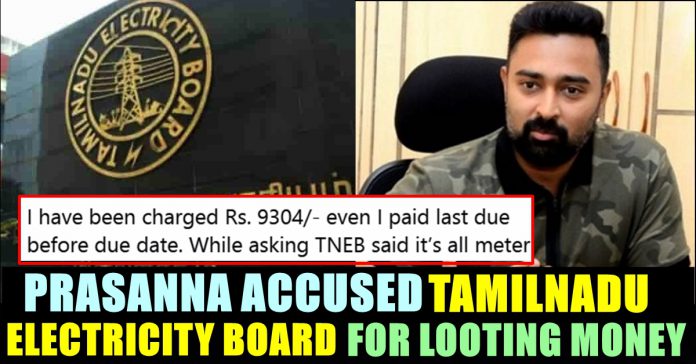 Due to the coronavirus which killed more than three lakh seventy thousand people, the government has extended the lock down for the 4th consecutive time. The centre has announced that the lockdown will last till 31st of June. For past 2 months, people in country India are spending most of their time in their respective homes. The virus which was declared as a global pandemic by WHO, has affected the daily lives of human beings. People are forced to stay in house, result of which the usage of electricity is increased in large manner.

Daily labours, Industrialists, Entrepreneurs and people working in almost every field are suffering financially due to the Corona outbreak. Tamil Film industry is no exception as production of all the movies got interrupted. Celebrities who belong to Tamil film industry are engaging themselves by being active in the social media platforms. They are conducting chat sessions with their fans and followers and many of them are trying new ways such as playing games, reading and learning to play different kind instruments to kill the boredom as well.

This lockdown situation has led the film stars to created awareness as well. Since the start of lockdown, cinema celebrities across the country are asking their followers not to roam around unnecessarily. Now, actor Prasanna who is known for acting in films like Anjathe, Mafia has came forward to create awareness among his followers about the Tamilnadu Electricity board.

Taking to his official twitter account where the actor enjoys nearly 9 lakh followers, Prasanna accused the Tamilnadu electricity board for looting money from public using this COVID 19 lockdown situation. He posted a tweet asking “How many of you feel #TNEB is on a looting spree amidst this COVID lockdown?”

During the complete lockdown, members of Tamilnadu electricity board didn’t go to the houses of residents to note the reading. Instead they asked people to pay the bill amount of previous month. Now, after few relaxations, authorities are forcing people to pay excess amount though they paid the bill for last month. Complaint regarding the same is being raised by several number of people. Few even said that the bill amount is high due to the large consumption of electricity for past two months. Many followers of Prasanna also felt the same. Check out some of the reactions below :

Bill high is other matter. 3month units must high for all compare to two month. That's the problem. Who said to take reading after 3months. If they take reading in 2months more money save, due to slab system

I have been charged Rs. 9304/- even I paid last due before due date. While asking TNEB said it’s all meter reading we don’t do anything!!!!We are adjusting to live with everything nowadays…

TNEB is a bacha in front of BESCOM. One of the costliest rates in the country with the worst service with daily power cuts and giving stories. TNEB is better in terms of service for the past few years.

#TNEB is looting our money by using #Lockdown
Instead of deducting Units and payed amount last month, they deducted only the amount not by units. So, we are paying extra amount to #TNEB. This is calculated and planned robbery. https://t.co/A9HGYL6yEo

This tweet from the film actor garnered wide attention as it received more than four thousand likes so far and 500 shares as of now. Comment your views on this tweet of Prasanna !!

Previous articleMeera Chopra Wants This Top Hero To Reply Her !!
Next articleAadhar Card Is Must For A Hair Cut In TN !!

Anitha Sampath who recently grabbed headlines for all the wrong reasons, has now talked about Simbu's inexperience as Bigg Boss host and earned the...