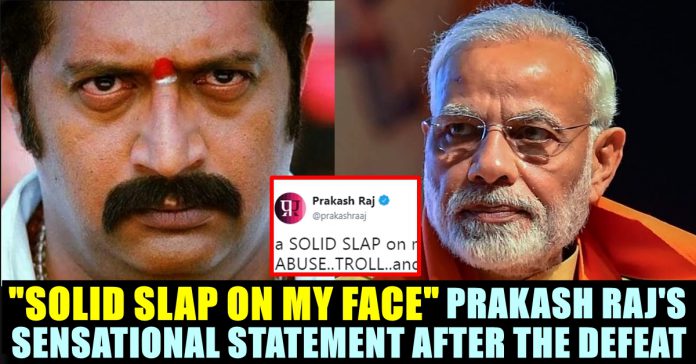 Actor and Lok Sabha candidate Prakash Raj, who is known for his attacks on BJP and PM Narendra Modi, said that the election results have turned out to be a “solid slap on my face”.

Prakash Raj, who has time and again attacked the Bharatiya Janata Party, said that he will still continue with his stand against the ruling party. Actor-turned-politician Prakash Raj on Thursday said that the Lok Sabha election result was a ‘solid slap’ on his face. As of 2 pm, Raj, an independent candidate, was trailing behind BJP’s PC Mohan with a decisive margin from Bengaluru Central Lok Sabha constituency.

Raj took to Twitter and said that he will continue to ‘fight for secular India’ despite the ‘abuse and humiliation’ that came his way during the election campaign.

His tweet read as “a SOLID SLAP on my face ..as More ABUSE..TROLL..and HUMILIATION come my way..I WILL STAND MY GROUND ..My RESOLVE to FIGHT for SECULAR INDIA will continue..A TOUGH JOURNEY AHEAD HAS JUST BEGUN ..THANK YOU EVERYONE WHO WERE WITH ME IN THIS JOURNEY. …. JAI HIND”

a SOLID SLAP on my face ..as More ABUSE..TROLL..and HUMILIATION come my way..I WILL STAND MY GROUND ..My RESOLVE to FIGHT for SECULAR INDIA will continue..A TOUGH JOURNEY AHEAD HAS JUST BEGUN ..THANK YOU EVERYONE WHO WERE WITH ME IN THIS JOURNEY. …. JAI HIND

Not all victories are joyous and not all defeats are in vain. You are a good man.

What a spirit ❣️

Time to shift back to Chennai. Bye bye.

Pl go back to acting prakash.. I am a huge fan of ur comedy.

On Sunday, the actor had rejected the predictions by Exit polls and hoped that the citizens would prove them wrong.

With the EXIT POLLS ….Let some DAY DREAM that NIGHTMARE will come back. But ON 23 rd …I BELIEVE CITIZENS will PROVE it WRONG ..till then let’s sing n celebrate…what BAPU JI Taught us …pls retweet n share 🙏🙏🙏 pic.twitter.com/qaO3WotJAt

Prakash Raj had been vocal on social and political issues and had frequently attacked the Narendra Modi government. He used auto rickshaws during his campaign.

The BJP was leading in 24 out of 28 seats in Karnataka as votes were counted for the national election. The Congress and Janata Dal Secular led in only two seats and one. Across the country, the BJP has scored a spectacular mandate for a second straight term in power.

Previous articleGayathri Raguramm Getting Mercilessly Trolled For Her Tweet After The Election Result !!
Next articleWhy Gautham Gambhir Thanked Harbhajan Singh & Lauded His Performance For CSK ?? Check Out !!