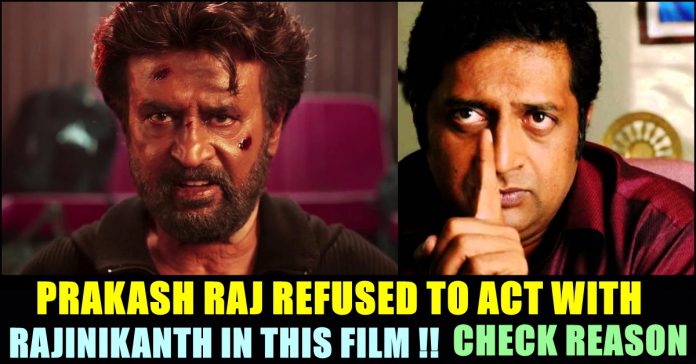 Prakash Raj, being considered as one of most versatile actor of Indian film industry, lives in the hearts of Tamil cinema audience through his performances in films such as Abiyum Naanum, Gilli, Mozhi, Vasool raja etc. Be it a deadly villain in Pokkiri or a loveable friend in Mozhi, Prakash raj nailed it in every character he was given. One of his recent notable performance took place in the film “Asuran” in which he played a lawyer in 1960’s.

He acted with almost all the top actors of Kollywood such as Rajinikanth, Kamal Haasan, Ajithkumar and Vijay. With Kamal Haasan, Prakash Raj acted in Vasool Raja and Thoongavanam and with Ajith he appeared in Aasai and Paramasivan. Needless to say, he was a part of Vijay’s biggest breakthroughs Gilli and Pokkiri. But with Rajinikanth, Prakash Raj acted in only one movie, that too in a small role. He collaborated with the Superstar actor in Padayappa as a policeman. A recent report had said that he almost acted with Rajinikanth in his production venture “Baba”.

Yes. Prakash raj was supposed to play a role of a chief minister in Rajinikanth’s “Baba” but the actor refused to act in the movie after attending a photoshoot. The reason behind the refusal of Prakash raj is a major change in the script regarding his role.

Movie journalist Venkat Subha who worked in “Baba” as a casting agent revealed about this unknown fact in Touring Talkies youtube channel. “Prakash raj was supposed to a main villain role in “Baba” as a chief minister. Rajinikanth chose him to play the role and gave him an advance. Prior the shooting, Prakash raj attended a photoshoot as his posters and banners are required to take place in a different scene. However, during the shooting of his scenes, Rajinikanth told Prakash Raj that the film requires less number of days from him” says Venkat Subha.

Prakash raj who initially accepted, said to his manager that he wants to know if anything changed in script. When he came to know that the importance of his role got reduced in the film through an associate of Director Suresh Krishna, Prakash raj immediately said that he is walking off the project. Though the makers of “Baba” said that they are not reducing his salary, Prakash raj firmly refused to act in the film.

On knowing the decision made by Prakash raj, Rajinikanth reportedly felt that what Prakash raj did was right. He who produced the film by himself, decided not to demand the advance back from the actor. Watch the video below :

However, Rajinikanth and Prakash raj are acting together in an upcoming commercial flick “Annaththe” which is being directed by Siruthai Siva. The 168th film of Rajinikanth has an ensemble cast including Nayanthara, Keerthy Suresh, Kushboo, Soori, Sathish. The film’s shooting which got interrupted due to the Corona crisis is expected to get a theatrical release on Pongal of 2021.

What do you think on this decision made by Prakash raj and Superstar Rajinikanth’s response to it !!

Previous articlePopular Actress Replied To Those Who Questioned Her For “Not Wearing Bra”
Next articleFollower Recommended Director Cheran To Vijay Sethupathi !! Director Reacts