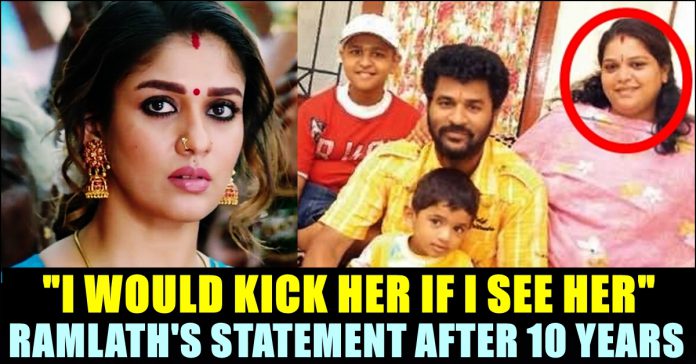 Unlike other heroines, Nayanthara’s personal life is transparent to the public. He actress who fell in love with actor Simbu during the shooting of his “Vallavan” movie and broke up with him after few years. During the making of “Villu” which was released in 2009, Nayanthara committed in a relationship with Prabhu Deva. While they are in a relationship, Prabhu Deva’s wife Ramlath filed a petition at the family court, seeking directions against Deva from living in a relationship with Nayanthara and requesting a reunion with him. Furthermore, she threatened to go on hunger strike if Prabhu Deva married Nayanthara. The actress got separated from the dancer-actor.

Now, after several years, Ramlath again opened up on the 10 year old controversy it seems. According to Times Of India, Ramlath slammed Nayanthara in one of her recent interview. She who got divorced with Prabhudeva on 2011, cursed the actress for ruining her marriage life.

Nayanthara who is currently committed in a live-in relationship with director Vignesh Shivan, said that it was better to live alone than to live with someone who could not be trusted about her past relationships. Talking about the same, Ramlath, in a recent interview said that she could not believe that Prabhu deva was in love with Nayanthara at all. She said that Prabhu deva was an honest man and had been taking care of the family for past fifteen years. Prabhu Deva recently bought her a house and she feels that that he has changed now, says reports. Talking about the “darbar” actress, Ramlath said that she stole her husband and she was a kind of woman who stole other people’s husbands. She went on curse Nayanthara by saying that she should be punished and added if she saw Nayanthara somewhere, she would kick her, TOI report says.

Nayanthara is one of the very few female actors who rules Tamil film industry for more than 15 years. Being the highest paid actresses of South Indian film industry, Nayanthara is also the only actress who manages to act in both female centric movies and hero oriented movies. The surprising fact about it is that the “Bigil” actress shines in both the regions. Since the 21 days lockdown announcement from Prime Minister, highest paid actors are donating their part to both public people and to the people who are associated with their own industry.

However, these statements of Ramlaath has instigated a big time controversy against the actress who is about to appear in Mookuthi Amman, Annaththe and Kaathu Vaakula Rendu Kaadhal.

After finding out that the background image of "Jailer" title look was extracted from pinterest website in Google, a number of online users including...