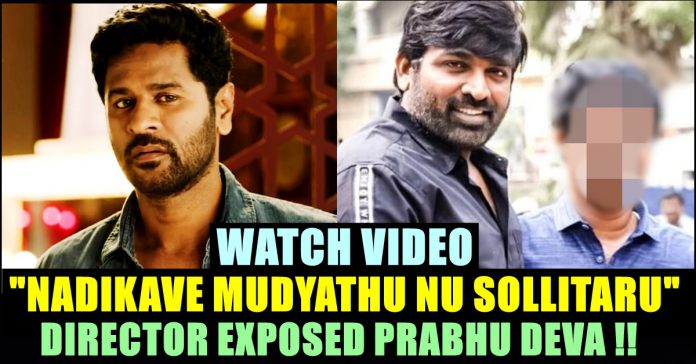 Prabhu Deva Missed To Act In This Blockbuster Film Because Of This Reason!! WATCH

Ace filmmaker Cheran who is known for making quality films such as Autograph, Thavamai Thavamirunthu has participated in an interaction with veteran filmmaker Chithra Lakshmanan and shared about many of his experience he gained while working in the Tamil film industry. He recently made headlines for participating in the Kamal Haasan hosting Bigg Boss show. In the show we came to know that Kamal Haasan and Cheran worked together in a project.

In the interaction, Cheran revealed how he made into acting, being a passionate director. He said that his friend and cinematographer Thangar Bachan forced him to act in the film “Solla Marantha Kadhai” by seeing his personality in the sets of Paandavar Bhoomi, in which they both worked together. Cheran said that he acted in “Autograph” only after trying all the possibilities to try another actor.

The film “Autograph” was produced and directed by Cheran. The film which is now has a cult following was commercially acclaimed during its release time as well. Recent blockbuster movie Premam heavily resembled Autograph and many fans believed that Autograph must be the inspiration for Alphonse Puthren to make Premam. It was known that leading actors such as Vikram and Aravind Swamy were offered to do the lead role but they didn’t accept to do the fil due to various reasons.

The story revolved around the protagonist Senthil and his love interests during the various stages of his life. Gopika, Sneha, Mallika and Kanika played the roles of lead heroines in the film. In this interaction with Chithra Lakshmanan, Cheran revealed one more actor with whom he almost went for shoot to make “Autograph” by having him in the lead.

He also shared about why he walked out of Kamal Haasan’s “Mahanathi” in the interaction. (Also Read : Cheran Opened On What Happened Between Himself & Kamal Haasan For The First Time !! WATCH) Further Cheran updated about his upcoming project with Vijay Sethupathi. He said that he is awaiting for the dates of Vijay Sethupathi and is expecting it to happen during August or September.

Prabhu Deva is a leading dance choreographer and filmmaker in India right now. He is also acting films but failed to impress the audience with his recent appearances. Some of his recent box office duds are Gulebagavaali, Charlie Chaplin 2, Devi 2, Lakshmi etc. He is now committed with director Adhik Ravichandran and the film is titled as Kadhalan Returns.

What do you think on Prabhu Deva missing the opportunity to act in Autograph ?? Comment your views !!

After hearing Anitha Sampath uttering "item song" to mention the category of songs that takes place in films with no connection with the plot,...

Daughter of Tamil cinema's one of the prolific filmmaker Shankar is going to debut as heroine through actor Suriya's production venture which features his...

After Rajinikanth announced that he is not going to launch his political party, ardent fans of the actor felt dejected and has been expressing...