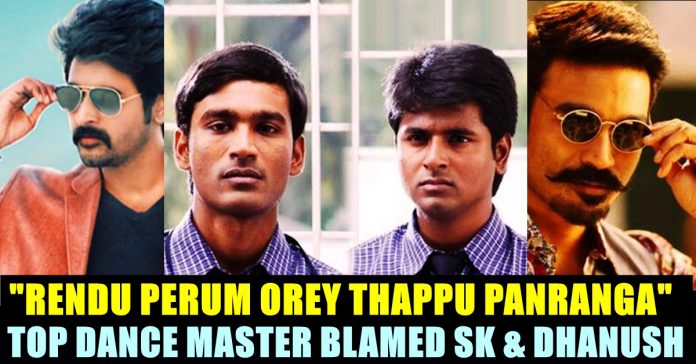 Dance choreographer Robert who is known for composing dance moves for various blockbuster songs, has expressed his disappointment over other state dance choreographers occupying the job opportunities in Tamil film industry and condemned Tamil heroes for letting them to do it. Particularly, he pointed out a Andhra Pradesh based choreographer Johnny for grabbing the opportunities of the Tamil films of top heroes such as Sivakarthikeyan and Dhanush.

Robert who predominantly working in Tamil film industry as dance choreographer, also choreographed song in various other languages across India. He has also appeared as an actor, often portraying villainous roles and by making cameo appearances in songs he has choreographed. He is very well known as a best friend of actor Simbu and for the relationship he had in the past with Vanitha Vijayakumar, a controversial personality. Now, he is living with his wife Krishna Priya and daughter Harshika and is currently avoiding to talk about Vanitha Vijayakumar in public interactions as he has moved on and to avoid controversy. However, media channels are still approaching him to open on the ongoing issue regarding Vanitha’s third marriage.

Now, in his recent interaction with Vikatan in which Robert asked people to avoid talking about Vanitha to put a full stop to the controversy, opened on the major issue his department is facing currently. “After watching the songs from the movie “Pattas”, I felt the moves are extraordinary. Immediately I called my assistant and asked whether Prabhu master did the choreography for the film. He said that someone called “Johnny” from Hyderabad did the choreography. He further said that Johnny did choreography for all the five songs in the film. I got shocked on hearing about it” said Robert in the interaction.

“Me myself being a best friend of Simbu, did only one or two songs in his films. He won’t give me single card and I won’t ask for it as well. I want everyone to work. If you like his work, give him one song and give the other songs to other choreographers as they have to survive” Robert said in his interview who blamed film directors of Tamil industry for letting actors to decide about the choreography department.

“Followed by Dhanush, he (Jhonny) did two songs for Sivakarthikeyan in “Namma Veetu Pillai”. These small mistakes committed by actors affects us in big time. General public would know about only four, five dance masters. But there are 800 masters in our department. What will they do for job ??” asked Robert.

Robert also expressed his disappointment over Prabhu deva for giving the whole credits of “Rowdy Baby” to Johnny Master in an award function.

“Next time if I got an opportunity to meet Prabhu master, I will say to him directly not to give credits like that. We have a huge faith in him.” said Robert in his interview.

Reactions Flooding In Internet After Makers Of “Jai Bhim” Made This Major Change !!

Several kind of reactions are flooding the Internet platforms after "Jai Bhim" makers changed the symbol in the calendar that was hanging in a...

Not many days ago, Rishabh Pant, the 22 year old cricketer became the victim of severe troll for his performance in the national side....