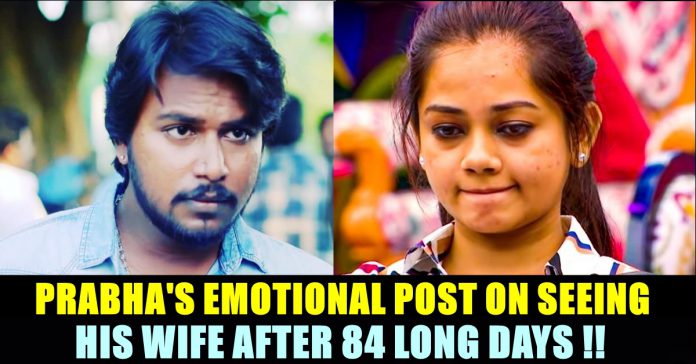 Anitha Sampath got officially evicted as the 10th contestant from the Bigg Boss house on the Sunday’s episode of the show. Her eviction came in as a shock to the viewers as contestants such as Aajeedh, Somashekar are still playing the game without getting evicted despite of doing nothing significantly in these 84 days. Now, after her eviction, her husband Prabhagaran uploaded a story in his official Instagram account, celebrating the return of his wife.

While getting evicted, Anitha refused to break the box that was provided by Bigg Boss to save gold coins, saying that she named it after her husband Prabha. Though Bigg Boss and captain Balaji insisted on breaking the box, she refused to do it. However, she broke it later without affecting the picture of her husband in it. Even while interacting with Kamal Haasan, ANnitha requested him to say “Hi” to her husband and mentioned that he is a die hard fan of the “Vikram” actor.

“I initially thought that I would get evicted from the house within 2 weeks. Staying this longer in this house matters a lot to me and I wished to celebrate new year with my husband and family.” said Anitha and encouraged the working women to be believe in themselves. “I myself is a big example for you all. Don’t lose hope and your life will change one day” she said.

Now, after her eviction, Anitha’s husband came up with an Instagram story celebrating his wife’s come back. Uploading a picture of an “heart in eyes” emoji, Prabha wrote “My Devasena is back” in his story and added the song “Veeron Ke Veera” from “Bahubali” movie in the background.

Prabhagaran has been responding to the comments surfaced against his wife since her entry into the house. Once he replied to dance choreographer Sathish who mocked his wife. Also Read : Anitha Sampath’s Husband Replied To This Celebrity Who Mocked Her !!

Anitha Sampath, a news reader by profession is pretty much active in performing tasks and also in interacting with her fellow housemates. She had a rift with Suresh Chakravarthy in the first week over a comment he made about news readers. A statement she made on widows being a part of Hindu rituals was lauded by Kamal Haasan himself.

Anitha also became the main cause for the elimination of Samyuktha. The way she questioned Rio in the phone call task also impressed a number of followers. However, her habit of making a fuss out of petty issues frustrated the viewers at times which is evident through the comments that surfaced in social media platforms. Though she grabbed enough amount of footage in the past week, the rift that took place between herself and Aari could have made fans hate her enough to evict her.

Rajinikanth starrer Petta has opened well at the box office. According to reports, the movie has had a bigger opening than Thala Ajith’s Viswasam...