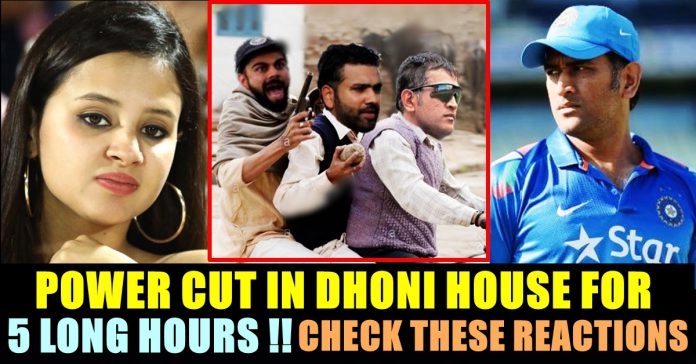 Sakshi Singh, who brushed away the rumour about Dhoni’s retirement has now made use of her twitter account which has more than 3 lakh followers to report about unwanted power cut in Ranchi. Sakshi is living with her husband in his hometown Jharkhand.

On Thursday, Sakshi voiced her displeasure about the frequent power cuts in the city and wrote: “People in Ranchi experience power cuts every single day. It ranges from 4 to 7 hours daily.”

She said that at the time of writing the tweet, there had been no electricity for the past five hours despite fine weather and no festivals being celebrated.

“There has been no electricity for past 5 hours today that is 19th September 2019. “There is no reason for power cut today as the weather is good and there is no festival,” she added. “I hope the problem is addressed by the concerned authorities.”

Her tweet read as “People in Ranchi experience power cuts every single day. It ranges from four to seven hours daily. There has been no electricity for the past 5 hours today [September 19]. There is no reason for power cut today as the weather is good and there is not festival. I hope the problem is addressed by the concerned authorities.”

Check out some of the reactions for her tweet here :

Bhabi Not only Ranchi full Jharkhand faces this issue… daily 😂

This is very bad from government of jharkhand @msdhoni pic.twitter.com/5hL459sxKE

Really glad that you spoke ma'am. People who have an influencial voice must stand for the cause of the common man 👍

Call Srini mama or Gurunath Meiyappan. Maybe they can fix it!

I agreed with you… Even I m faces the same problem, when my exams are knocking at the door.

What do you think on this issue faced by Sakshi Dhoni and by the people of Jharkhand ?? Comment your views below !!