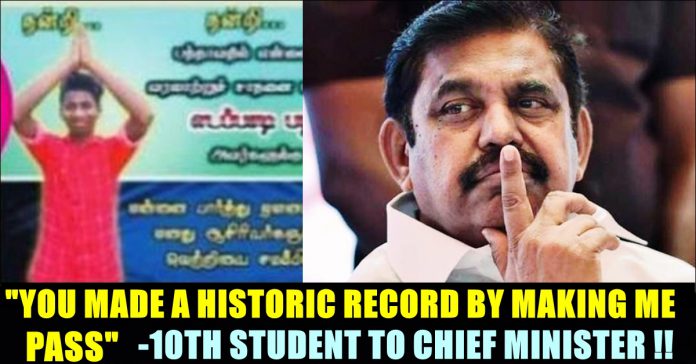 Followed by Telangana government, Tamilnadu government announced the cancellation of public exams for class 10 students on June month due to the threat created by COVID 19 virus which killed more than 7.5 lakh people worldwide. Students are finding it extremely difficult to study through online classes which is physically hurting them as they are required to sit straight 8 hours in front computer or cell phone display. A recent report has suggested that schools are expected to reopen only during December month as the number of COVID 19 positive cases are increasing in daily manner.

Meanwhile, some students are having a good time staying at home as well, especially those 10th standard students who never expected that they would go to the next grade successfully by cracking the public board exam. One of such 10th standard student who got promoted to 11th standard due to the government’s decision, celebrated the happiest event of his life in style.

On 11th of August, the results of 10th grade students released by Directorate of Government Exam Tamil nadu. A total of 9, 39,829 students who registered to write the exam got promoted without exam. Students have been evaluated on the basis of their performance in the Quarterly and half yearly exams and based on their attendance.

Among the lakhs of students, Nishanth who belongs to Kurungudi of Kadalur district also got passed with the help of Tamil nadu government. The student, to celebrate his promotion, designed a poster and uploaded it in his facebook account to let his friends and followers know about his achievement.

In the poster, Nishanth thanked chief minister Edappadi Pazhaniswamy by saying that he committed a historical record by passing him in the 10th board exam. Further he trolled the teachers who mocked him during his tough times by saying that he dedicates his achievements to them.

Check out his design here :

This news is currently trending in the internet with hilarious reactions. Check out some of the reactions below :

Out of 9.37 lakh students who have passed the Tamil nadu SSLC exam, 471759 are boys and 468070 are girls. A total of 6235 differently abled students were also passed. The students having grievances over their marks, can submit the required form at dge.tn.gov.in between August 17 and 25.

Comment your views on the poster designed by Nishanth for passing in 10th board exam !!

For Buying This Player For 6.75 Crores, Fans Thrashed CSK !!

IPL auction is the talk of the town right now. Pat Cummins, with a base price of Rs 2 crore, became the most expensive...