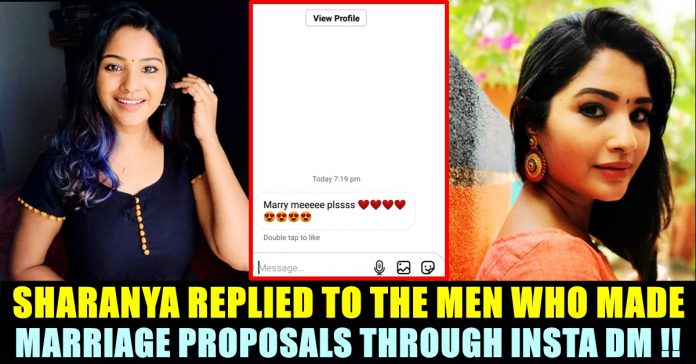 People searching for their life partner in online medium is not something new in this digital era. We have seen a number of successful couple who ended up marrying each other after meeting virtually in a random social media platform. Celebrities who are associated with Television and cinema industries receiving marriage proposals in online platforms increased in a vast number as well.

Days ago, an Instagram user proposed video jockey Anjana to marry him and now actress Sharanya who is known for acting Television serials seems to have received a number of marriage proposals in her inbox. Replying to such proposals, the actress made an Insta reel to make them shut once and for all. It is also notable that Sharanya is committed and has been uploading posts with her better half in her official Instagram account.

Sharanya Turadi who is known for acting in “Ayuzha Ezhuthu” and “Nenjam Marappathillai” is pretty much active in her Instagram account. She is currently enjoying 8.5 lakh plus followers by uploading 1237 posts so far. Before acting in serials, Sharanya was working as a news correspondent and got recognised for her collaboration with Puthiya Thalaimurai news channel. She also acted as a lead in Sun TV’s “Run” serial.

Despite of her busy schedule, Sharanya is very much involved in engaging her online followers by uploading pictures from the photo shoots she conducted, about her daily routines and her work updates. Check out some of her recent post below :

On Thursday, Sharanya uploaded a reel in her Insta timeline, replying to the men who made marriage proposals to her through Instagram direct message. She lip synced to an audio in which a girl could be heard saying how she would behave as a wife.

Sharing the video, Sharanya added a caption asking “Ponnu ok va?” Check out her reel below :

When one of her followers asked Sharanya what would she do as a wife, she made a humorous yet intelligent reply saying “Love pannuven 😝”

Sharanya is currently a relationship with Rahul Sudharshan whose Instagram bio says that he is an Entrepreneur, Businessman, Business Development Consultant / Specialist , Proficient Speaker and Educationalist. The actress uploaded a number of pictures and videos with him in her Instagram account.

Previous article“Am I A Snake Or Lizard To Crawl ??” CM Edappadi K Pazhaniswamy Replied To Stalin’s Derogatory Comment
Next articleKamal Haasan Opened About His BIGG BOSS Salary For The First Time !! WATCH

JUST IN : Kalidas Jayaram Just Made His Relationship Public ??

Followed by Harish Kalyan who announced about his marriage on the auspicious day of Vijayadhasami, young and emerging actor Kalidas Jayaraj revealed his girlfriend...