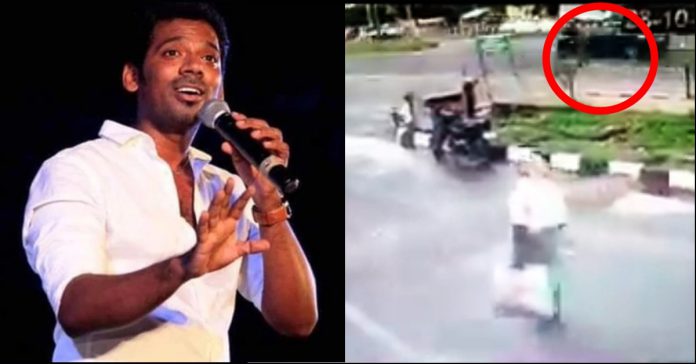 Mano, a popular mimicry artist and comedy actor left the film industry in utter shock as he died in a tragic car accident. Being a popular face among TV watchers through reality shows such as Maanada Mayilada, Mano and his wife were travelling to their home in their car after Diwali celebration in their friend’s house in Guduvancherry.

The incident which took place on Diwali day, killed the actor on spot. Mano and his wife Liviya were on their way to Avadi and it happened in the Vandalur- Meenjur highway. According to reports, while driving the vehicle, lost his control and crashed into a median and his wife who was in the passenger seat was immediately admitted in Porur Ramachandra hospital. She is currently getting treatment in the Intensive care unit.

The couple has a 7 year old daughter and the loss of Mano made many people associated to film industry in deep grief. Popular actor/director/producer Mano bala took twitter to express his condolences for the loss of the young artist.

Mano has acted in a movie named as Puzhal as one of the lead which was released in 2010. After getting widespread acclaim for his mimicry talent, Mano got selected in Vijay TV’s Kalakapovathu Yaaru. Then he got an opportunity to host the Nagaichuvai Kondattam show in Kalaigar TV.

Meanwhile, according to Indiaglitz, a serial actor and one of a friend of Mano has released the CCTV video footage of Manoj’s car accident. In the video we can see a black car losing its control only to collide with another vehicle which caused severe impact.

Here’s what actress Kajal Paasupathy has to say about the accident :

Yeah. He’s an actor, dancer, writer, great comedian, mimicri artist what not. He’s a good soul. #RIP #mano #blackday
Shocking to know that he passed away last night in an accident. May his soul Rest in Peace. https://t.co/PpJwPjcTCW

Actress Suzane george who is known for her appearance in “Mynaa” movie also reacted to the accident :

RIP brother … too early fr u to leave dis world thou 😣 #ripmano pic.twitter.com/pDRYU4lHcM

Previous articleVivek’s Old Comedy Became True In Sujith’s Death !! Here’s What The Actor Has To Say !!
Next articleGuy Said That He Is Not Straight Anymore After Seeing Maddy’s Picture !! Here’s How Maddy Replied !!