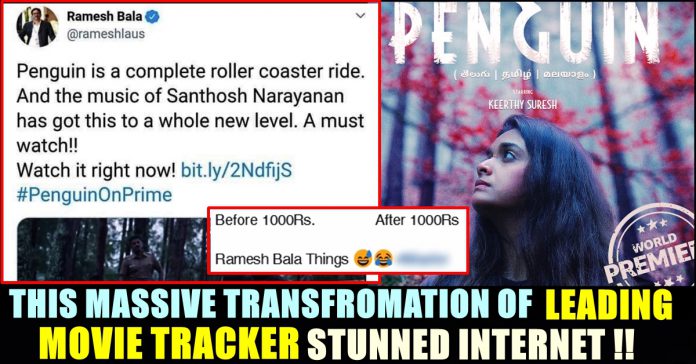 Keerthy Suresh’s “Penguin” produced by Karthik Subbaraj’s Stone bench productions released on Amazon Prime on 19th June with massive expectation. The film which was directed by debutant Eashwar Karthik, has depicted the struggles faced by a Mother who is in nsearch of her missing son.

Touted to be a horror thriller, the film became the second mainstream Tamil film to get a direct online release after Ponmagal Vanthaal. Music composed by Santhosh Narayanan, the film was produced by Stone Bench productions and Passion studios.

The teaser of the film suggested an emotional mother’s struggle to rescue her son from a serial killer who is called as “Umbrella man”. Reports said that Keerthy accepted to do the role after after hearing two lines of the story as she got moved by the core plot. As soon as releasing, the film received many kind of receptions from the audience of Tamil cinema.

Movie trackers and youtube reviewers of Internet platforms are also posting their opinions regarding the film in their respective platforms. Meanwhile, screenshots of a couple of tweets of Leading Tamil movie tracker Ramesh Bala who enjoys 4 lakh plus followers in the micro blogging social media site is going viral.

Ramesh Bala, whose Twitter bio says that he is an Entertainment tracker, working for Hollywood, Bollywood, South India and China film industries, posted a tweet after watching the movie Penguin. He said that the film’s supporting cast is very weak and they let down the movie.

“Twist and turns are not convincing. Watch it for Keerthy’s performance” he said in his tweet after watching the movie.

Four hours later on the same days, Ramesh deleted the above tweet and said that “Penguin” is a complete roller coaster ride. “The music of santhosh narayanan has got this to a whole new level. A must watch” he said by adding the link of the movie.

Contradiction between these two tweets grabbed the attention of the twitter users who started trolling the tracker for changing his stand about the movie within hours. Few even stated that he got paid to post tweets such way.

Many movie reviewers of online platforms are accused of receiving payment from movie production houses in order to promote their films. People who prefers to watch online reviews before spending their time and money on a movie are very much worried and expressing their disappointment over this issue for a long time.