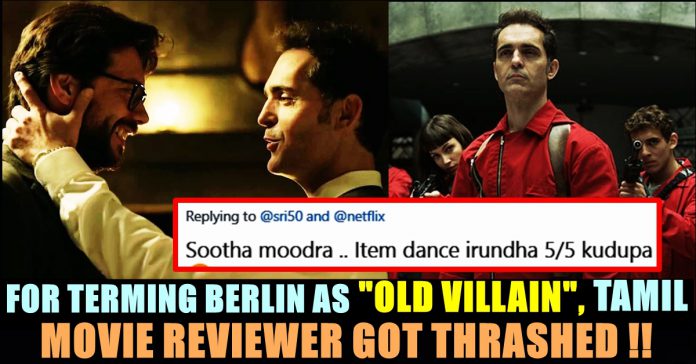 Indian film industry hasn’t seen a single release in past 1 month due to the lockdown announcement from central government. Though movie reviewers and Trackers found a way to be active in their field. Sreedhar Pillai, one of a popular movie reviewer and Entertainment Industry tracker reviewed the fourth part of Money Heist through one of his tweet. He gave 3 marks out of 5 and criticized the series by saying that it is predictable.

He appreciated the performance of characters played by Úrsula Corberó and Najwa Nimri. But what grabbed the attention of the netizens is the way he termed popular character “Berlin” played by Pedro Alonso. He said that the makers kept too many flashbacks to showcase the “Old Villain” Berlin. This micro review triggered the fans of the series who started trolling him for various reasons.

“The Spanish drama is slick and exciting but is predictable and looks stretched. The principal characters especially #Professor seems to have lost his mojo. #Tokio & #Sierra are best of the lot.Too many flashbacks to showcase the old villain #Berlin.” read his tweet.

#MoneyHeist4 on @Netflix 3/5.
The Spanish drama is slick and exciting but is predictable and looks stretched. The principal characters especially #Professor seems to have lost his mojo. #Tokio & #Sierra are best of the lot.Too many flashbacks to showcase the old villain #Berlin.

The character “Berlin” being a blood brother of the lead character, “The Professor” aka Sergio Marquina, is main reason behind the “gang” stealing the gold from “Bank of Spain”. Though his character contains negative shade, he is the one who initiated the plan with “The Professor” and “Palmero” which makes him one of the protagonists. In the first season he would give his life to save Professor and his gang after making money from Royal mint. It is also notable that he enjoys a huge fan following across the world for the way he plays his character. These facts made the fans of the series to contradict with the statement of Sreedhar Pillai who called Berlin as “Old Villain”.

John Mahendra, son of veteran director Mahendran and the director of Vijay’s “Sachin” trolled his review by replying “Berlin, Villian? seriously? Lockdown effect I believe…or were u watching Lollu Sabha?”

Many others also trolled Sreedhar Pillai for this review. Check out some of their reactions below :

Kirukkan , he spoils a wonderfull series with his notorious words

Berlin is not a villian. Berlin is d hero. Not sure, whether u r watching d show or not.

Please stop judging about money heist and other series. Keep your limit only to regional movies @sri50

Have you watched the fourth part yet ?? Comment your views on this review of Seedhar !!