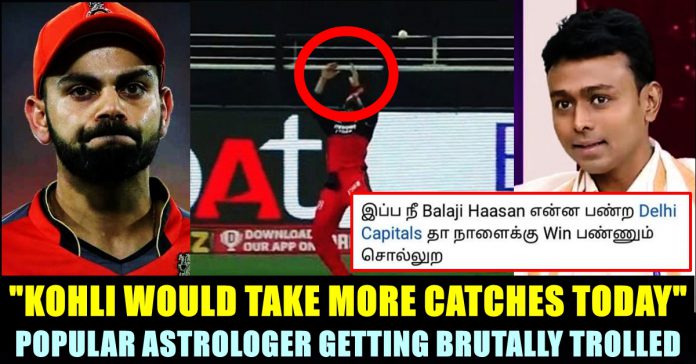 The two catches dropped by Kohli costed the match for Royal Challengers Bangalore. The Indian captain himself accepted that he should have led from the front by taking the two catches. Fans of the team are enraged with their favourite team’s 97 runs loss which will affect them in the run rate big time. Meanwhile, a popular Tamil astrologer named as Balaji Haasan made a prediction earlier saying that Kohli would take more catches in the match. He also said Padikkal would make a significant performance. Both his predictions went wrong and Balaji became a subject to severe online trolling.

Balaji Haasan became overnight sensation due to his accurate prediction on World Cup tournament. “This is a difficult question. We are just predicting and the rest lies with fate. The 2019 World Cup is taking place in England and the semi-finalists could be India, Australia, New Zealand and England. India and New Zealand or India and England could play against each other. However, someone new will win, like New Zealand. There is a high chance of New Zealand winning the world cup and Kane Williamson could be crowned as the Man of the series”. he said in the video that made him viral.

He later appeared in several TV Channels and youtube channels, predicting the future of Superstar Rajinikanth, Ulaganayagan Kamal Haasan and Thalapathy Vijay’s political career. Now, Balaji started making predictions regarding the IPL matches. However, all of his predictions went wrong so far and his statement about Kohli’s catches triggered netizens to troll him without mercy.

Balaji can be seen saying “Today he will take catches. In his (Kohli’s) horoscope, Raaghu is going to be above Chandran. To be precise, he will grab catches like picking flowers and also like “Mooku Mela Raja” as our Srikanth sir would always say” in the video. After Kohli dropped his catch, Punjab’s captain Rahul scored 42 runs in just 9 balls which costed RCB the match.

Check out some of the reactions for Balaji’s statements below :

Comment your views on these predictions of Balaji and the reactions he received !!