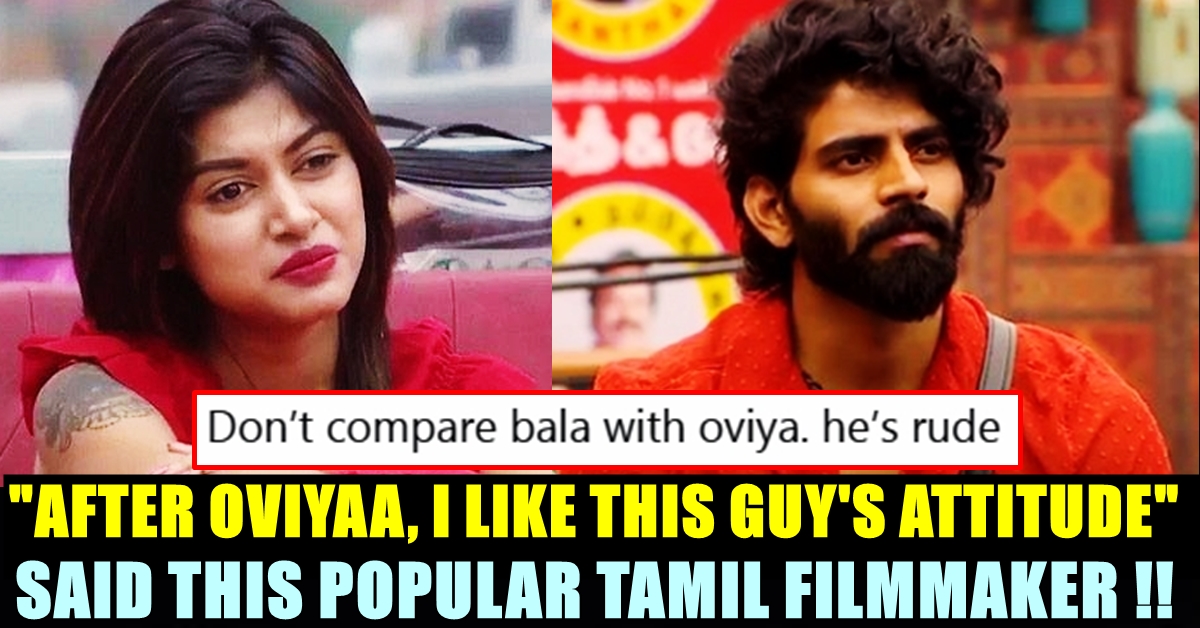 Balaji Murugadoss, one of the Bigg Boss contestants of this season is trending in Internet with thousands of tweets about him, all thanks to the issue that took place in the Bigg Boss house on the Tuesday episode. The way Balaji confronted a number his co-contestants has instigated a debate in social media platforms. With a set of people supporting what he did, many others slamming the youth by saying that he is arrogant. Now, a popular Tamil filmmaker posted a tweet stating that he Bala became his favourite contestant after Oviyaa from first season.

On Tuesday episode, the 25 year old contestant involved in a heated argument with his housemate Archana for waking him up while sleeping. This led other contestants such as Rio,Vel Murugan, Suresh Chakravarthy to question Balaji Murugadoss. The latter’s way of responding to them instigated a debate in social media with a set of people supporting and others opposing it. A promo released by Vijay TV regarding the issue made people to discuss more on Balaji Murugadoss’s behaviour which caused number one trending in the micro blogging social media site.

Now, Director Sam Anton who is known for making films such as “Darling”, “Enaku Innoru Per Irukku”, “100”, “Ghurkha”, posted a tweet saying that he started liking Balaji after Oviyaa. “Never wanted to post anything about #BiggBossTamil but seriously after oviya I am starting to like this #bala .. this guy is true and bloody on the face ..( as of now ) and I like it” he wrote in his tweet.

Never wanted to post anything about #BiggBossTamil but seriously after oviya I am starting to like this #bala .. this guy is true and bloody on the face ..( as of now ) and I like it 🤩🤩🤩🤩🤩

This tweet of the filmmaker received various kind of reactions. One of a twitter user asked him not to compare him with Oviya and said that he is rude unlike her. Few supported him as well.

Balaji Murigadoss who identifies himself as an outspoken and straightforward guy, never hesitated to express his opinions regarding the issues that are taking place in the house. On Tuesday’s episode, Bala who is in cleaning team, felt tired and went to sleep during the day time. Archana, captain of this week, wanted him to clean the house and sent other contestants such as Vel murugan and Aajeedh to wake him up.

Bala said that he can’t come to work and asked Vel murugan to clean the house with the help of other contestants who are awake. On seeing this, Archana who saw Balaji is awake, asked Rio “He wouldn’t work but will watch people from there ?”

Balaji heard Archana and got up from his bed fuming. “Do captain have horns ?” he asked while waking up and said “I will keep punishing people by demanding them to work with “Ammi kal” (a stone like equipment used to make chutney with bare hands instead of Mixie) once I become captain”