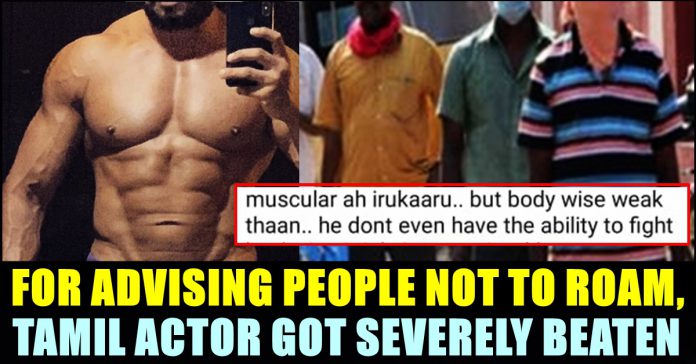 We are still witnessing cases of people violating the order implemented by the central government. COVID 19 which killed more than 88,000 people is a serious threat across the world right now. To avoid community spread in India, Prime minister of the country asked people to stay home for 21 days which is till April 14. However, to kill boredom, many people are roaming around without considering the announcement made by the central government.

Many influential personalities including politicians who are in power and celebrities who have huge fan base are advising people to stay home and to be quarantined. This doesn’t stop few people from going out and having fun with their closed ones. A recent report has said, actor Riyaz Khan who is popularly known among audience for doing the role “Kattadurai” in “Winner” movie, attacked by few people for asking them to maintain social distancing.

Riyaz Khan who isolated himself with his family in his Chennai residence, found few people crowding near his house, despite of the curfew issued by the government. Time of India reported that people were crowding near his house and talking to a mob. a few days ago. The actor himself shared the news article in his official Instagram account. The 47 year old actor currently lives in Panaiyur, reports suggested.

The report says that Riyaz Khan witnessed 5 members including a woman walking together near his house when he was jogging. The actor who tried to make them realize about the importance of social distancing at this situation, ended up having an argument with them. Unfortunately, one of the group member attacked Riyaz Khan during the argument. TOI reports that they also threatened to kill him.

Riyaz Khan who managed to leave the place safely, complained against those who attacked him in Kanathur police station. The police who registered the case, started their investigation. Check out the post he shared in Instagram :

To one of a user who asked why he didn’t hit back, Riyaz Khan replied by saying “so sad you didn’t understand what happened. Please stay awake bravery is being safe not hitting back keep social distancing god bless u”

Riyaz Khan who married to actress Uma in 1992, has two sons Shariq Hassan and Samarth Hassan. The actor recently signed to play an important role in Manirathnam’s Ponniyin Selvan and the shooting of the film got suspended due to the Corona outbreak. This news about the actor is doing rounds in social media platforms where people are showing their concern towards the actor.

Let us appreciate Riyaz Khan for being a law abiding citizen and wish him all the best for his future works !!

For harassing a student of IIT Madras within the campus, a 24 year old youth who belongs to the North part of the country...

Actor Vijay celebrated his 46th birthday on Monday and his fans who couldn't celebrate it in theatres due to the Corona crisis, trended several...