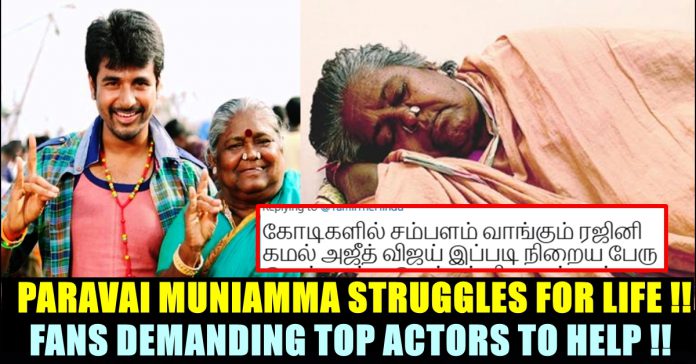 “Paravai Muniyamma” is known among Tamil cinema audience for her unique way of singing and for her onscreen appearances in films like “Dhool” , “Maan Karate” etc. Being a folk singer, Paravai Muniamma received Kalaimamani award from Tamilnadu government recently for her achievements in the year 2012.

Paravai Muniamma was once a busy actress in Kollywood who appeared in 84 films. She was last seen in “Royapuram Peteru” song from Sivakarthikeyan’s “Maan Karate”. After that she didn’t receive much offers from Kollywood to act and went to her hometown Madurai to live with her mentally challenged son.

She was hospitalized for two years back and Chief Minister Jayalalithaa had helped under MGR welfare scheme by arranging 6 lakhs fixed deposit in her name. Through that fixed deposit, Muniamma received 6,000 per month as interest. Now her health became even more worse as the above said amount is not enough for her treatment.

Last week, due to illness, Paravai Muniamma was admitted in Madhurai private hospital. As it was required lakhs of money for treatment, Muniamma was brought back to home and is now struggling for life according to reports. The reports also suggests that the 85 year old actress actress health became very poor that she couldn’t talk or hear.

Valli, one of her daughter while talking about Paravai Muniamma’s health said that her health became worse only after the death of her husband, Vellaichaamy, who cared for her very much. “Doctors said that her kidney and lungs were damaged. She is only consuming liquid food as she couldn’t take food.” Valli said.

However, even in this critical situation, Paravai Muniamma is worrying about the physically challenged son. She requested government to give the 6,000 Rs. she is receiving monthly to her son after her death.

As soon as this news received, social media users requesting the actors who worked with her to help for her. Check out some of their comments below :

Let us pray for a speedy recovery to Paravai Muniamma !!

Since actor Ajith announced Rs. 1.25 crores to the governments and his cinema industry, fans of the actor are celebrating him by sharing the...

This Gesture From Indian Railways For A Woman In Her Periods Winning Hearts !!

Getting your period while in transit is nothing less of a disaster. Especially when the cramps hit you, adding to the discomfort. If a woman...