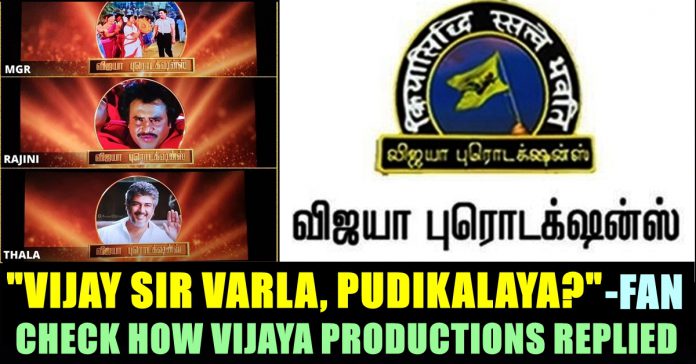 Sanga Thamizhan was supposed to release worldwide on November 15. Due to last-minute financial issues, the film couldn’t see the light of the day. Reportedly, distributor Ravinder Chandrasekar of Libra Productions had pending dues to pay to Vijaya Productions.

Now a recent video clip which is going viral in social media showed Vijaya Productions using Ajith Kumar’s Veeram clipping in their logo. Veeram is a 2014 released film produced by Vijaya production which has actor Ajith Kumar and Tamanna in the lead roles. This made fans of the actor very happy as they are sharing the clips in social media platforms.

Most of the ThalaFans felt Proud moment😍

On seeing these videos, one of a fan of vijay, asked Vijaya productions why they didn’t add Vijay in their logo. “yen sir title cardla vijay sir varla ungaluku pudiklaya” asked the fan to the production house.

After this tweet many tweet of Vijay fans started sharing teh clips which had Vijay in the clip. Check out the tweet shared by Vijay fans here :

What do you think on this reply from Vijaya productions !! Comment your views below !!

“Why Donald Trump’s Image Appears, When I Search For The Word “Idiot” ??” Asked Congress Woman !! Check How Sundar Pichai Replied !!

The search for the word “idiot” on Google apparently saw a jump after it was found a few months ago that it threw up...

Asal Kolar Blamed This Contestant For The Trolls He Received!!

As the show is nearing it's end, contestants who got eliminated during the initial weeks of the ongoing season of  Bigg Boss show, started...

Losliya Replied To The Harsh Comments She Received !!

Former Bigg Boss contestant and aspiring actress Losliya announced about one of her upcoming projects through her official Instagram account where she is enjoying...