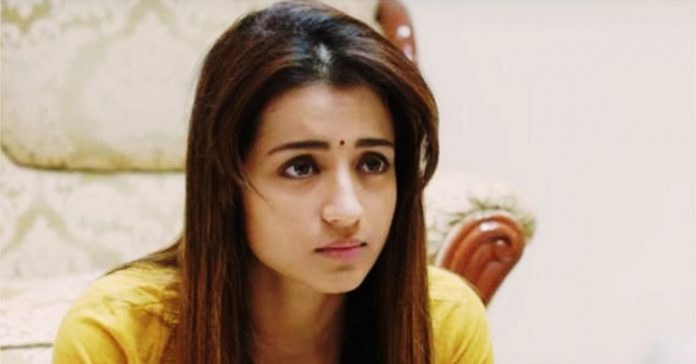 Every actress would love to be essayed in a film, in the way Trisha was portrayed in her latest film “96” in which she paired opposite to Vijay Sethupathi as his love interest. 96 is a very special film and it’s also the first time that Trisha is sharing the screen space with Vijay. In an interview with Indian Express, the actress revealed that one of the only reasons that she signed the film was because she wanted to work with Vijay. She said, “I was quite intrigued by the script when I heard it the first time. The other factor that really drew me to this film was the opportunity to work with Vijay.

No one expected 96 to create the kind of hysteria it did! said Trisha in the interview. “Honestly speaking even we didn’t expect it to (laughs) It’s too overwhelming, I really didn’t expect this to happen ever again in my career. Of course, I value it and cherish it but at the same time, it’s not something I take seriously because it happened on it’s own. It’s nice to see that all the hard work has paid off” she said in the interview.

The film is now being remade in both Kannada and Telugu by having different actors in the lead role. Samantha replaced Trisha in Telugu and Bhavana replaced her in Kannada version. Now to our shock, popular Malayalam actress and the “Asuran” lead lady Manju Warrier has revealed that she was supposed to act in “96” movie but missed it due to the filmmaker’s hesitation.

“I myself know it very lately in an award function in Dubai where Me, Vijay Sethupathi and Prem kumar participated. When I was on my way back after receiving the award, Vijay Sethupathi ran towards to me and said that director Prem Kumar wants to see me.” said Manju warrier in the interview.

Further she added that Prem Kumar admitted to her that he is a biggest fan for the actress’s work. “He said that he worked so hard to rope me in the project without my knowledge but failed to do it due to the hectic date issues of Vijay Sethupathi. I was shocked to hear it and felt that they could have asked me for once. They even contacted someone to make me act in the project but due to the confusion of Vijay’s dates, they hesitated to call me.” said Manju in the interview.

Watch the interview below from 8th minute :

However the actress lauded Trisha for doing the role effectively. She even said that no one could replace her in the role of “Jaanu”. “I just feel happy that I have crossed the director’s mind while he thought of the character. The film reached its destiny and I am so happy about it” said Manju in a humble way.

What do you think on Manju doing the role of “Jaanu” ?? Comment your views !!

Previous articleSimbu Fans Joined Danush Fans To Thrash Vignesh Shivan !! Check Out Why !!
Next articlePriya Anand Got Irritated On Seeing This Tweet About Vikram & Dhruv !!

“Why Are They Wishing Me On Christmas?” Woman Complained !! Young Actor Replied !!

The entire world is celebrating Christmas in a most celebrative way. As we all know, Christmas is a Christian holiday worshiping the birth of...

Robo Shankar Gets Emotional After Watching His Daughter In BIGIL Trailer !!

Vijay and director Atlee’s third collaboration, after the successful Theri and Mersal, has been titled Bigil. Fans of the actor have taken over Twitter...