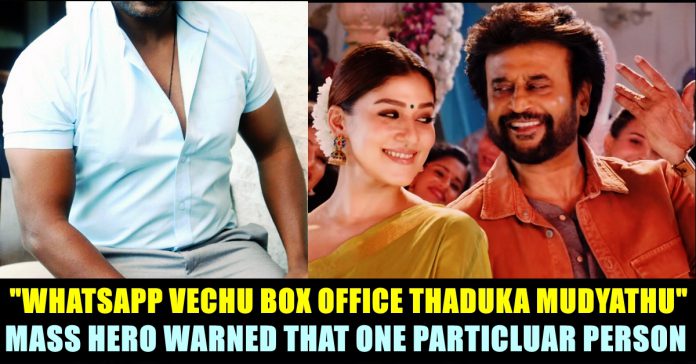 Darbar released in theatres recently and is running successfully in theatres so far. Since the release, the film found itself amidst so many controversies. The production house of Darbar announced that they will remove the scenes that hurts the sentiments of the followers of Sasikala, a close friend of former chief minister Jayalalitha who is currently serving her jail time. In the scene, the dialogue which features is about the characters in “Darbar” making fun of prisoners in South who roam outside jail while doing their sentence.

Followed by that, a whatsapp audio of people trying to spread the whole film in whatsapp in order to make the film a failure also surfaced in Internet. This matter brought in light by producer T.Siva to the press. He provided the evidence in front of media. Watch the video here :

Followed by this, Raghava Lawrence, popular actor, Director and an ardent Rajini fan has released a press release stating that no one can stop his Thalaivar’s movie from getting success. Lawrence even addressed those who tried to spread the movie in Whatsapp. The press release of Lawrence read “Hai friends and fans, few people thought that Thalaivar movie will not run successfully especially one person had planned so many things and mentioned in whatsapp to not go and watch the movie and all but beyond all this Thalaivar’s movie is breaking the box office. Yelaya kaila maraikalam but Malaiya maraika mudiyadhu. Malai da Annamalai, Antha aandavane nambo pakkam.”

The “Muni” actor’s fiery speech in the audio launch to praise his idol Rajinikanth became a subject to severe controversy. To prove himself as a biggest fan of Superstar Rajinikanth, Lawrence said that he destroyed the posters of actor Kamal haasan during his childhood. He said that the vandalised the posters of Kamal Haasan by throwing cow dung on it when he was a child. “Earlier everything was different. Now when I see Rajinikanth and Kamal Haasan together, being very close, I feel something good is going to happen” he said.

In Darbar Rajinikanth played the role of a cop in 1992 released Pandian. The background score and soundtrack were composed by Anirudh Ravichander, while cinematography and editing were handled by Santhosh Sivan and Sreekar Prasad, respectively. As soon as the film released, reviews pouring from all directions of Internet. Raghava Lawrence watched the film and said that the film is extraordinary.

What do you think on this statement from the biggest fan of Superstar ?? Comment your views below !!

During the nomination process, Ayesha nominated Vikraman saying that he is not the man whom he projects. She said that the way he mentioned...