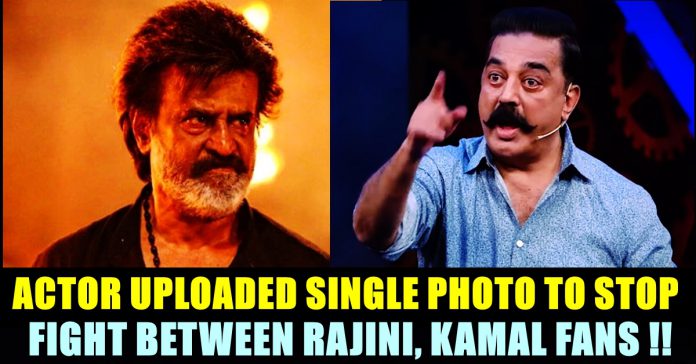 Verbal spat between fans of two different actors is common in this internet era. However, it didn’t start now but is existing since the discovery of Tamil cinema. Earlier it took place in common places such as movie theatres and in cinema events but now, as internet became an easily accessible one, fans are spewing hatred in social media platforms, especially in Twitter.

Though actors Kamal Haasan and Rajinikanth are having a strong bond between them, fans of them always involved in ugly fights in the micro blogging social media site. The recent speech of actor, director, choreographer Ragahava Lawrence in Darbar audio launch added fuel in it.

The “Muni” actor’s fiery speech in the audio launch to praise his idol Rajinikanth became a subject to severe hatred. In a way of proving himself as a biggest fan of Superstar Rajinikanth, Lawrence said that he destroyed the posters of actor Kamal haasan during his childhood. He said that the vandalised the posters of Kamal Haasan by throwing cow dung on it when he was a child. “Earlier everything was different. Now when I see Rajinikanth and Kamal Haasan together, being very close, I feel something good is going to happen” he said.

This speech of the actor created severe outrage which made everyone to spread hate messages against him. Few even compared how celebrities praised Kamal Haasan in the function of Kamal 60 with Lawrence’s speech to praise Rajinikanth. In Lawrence’s defence many Rajinikanth fans counter attacked Kamal Haasan fans. (Also Read : Raghava Lawrence Responded To The Hatred He Is Receiving !!)

On seeing the outrage between two set of fans, Lawrence released a press statement saying that his intention was completely different. During Rajinikanth’s birthday, the actor even said that his target was a different person and the fans of actor Kamal Haasan to apologize him as he is like a son of every one of them.

However, fans didn’t seem to be convinced by his speech which made the actor to meet Kamal Haasan in person to put a full stop to this issue. Sharing a picture with the Ulaganayagan Lawrence said that he explained about the entire issue to him and informed everyone that Kamal Haasan accepted it. He further added that Kamal Haasan inquired about his health and thanked him for his kind gesture.

This ended the issue and fans appreciated Lawrence for his gesture. Check out some of their reactions here :

There ends the matter. Though v still feel @offl_Lawrence must not have spoken those words, this particular gesture & his repeated attempts to pacify @ikamalhaasan followers must be appreciated. Ivar namadhu edhiri alla & Namakku neraya vela irukku friends. Let’s move on ✌️ https://t.co/r2xC3hfzZH

Comment your views on this gesture of Lawrence to stop the issue !!

12 Veg Restaurants In Chennai That Has Mouth Watering Food, Perfect For Ppl Who Eat Veg On Sat !!

For all the vegetarians out there, and people who would like to explore veg options, This article is for you guys! And if you're a...