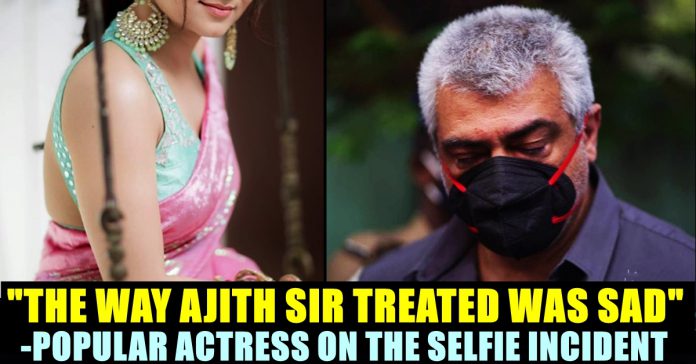 Actor Ajith and Vijay grabbed headlines after reaching their respective voting polls to cast their votes on the biggest day of Tamil nadu politics. When Vijay traveled in cycle and caused a debate in social media, actor Ajith kumar arrived at the Thiruvanmayur polling station along with his wife Shalini. We all know about the fan base these two celebrities enjoy in the state and people surrounded them when they came out in public without appointing people for their protection.

Vijay was forced to leave the polling station in bike and fans made Ajith to grab a cell phone of a fan who tried to click selfie with him without his permission. The video went viral in social media platforms with various kind of reactions from the social media users.

Being one of the most celebrated actor in the Tamil speaking state, showed up at the Thiruvanmiyur polling booth as the first person among all the celebrities, Ajith kumar was dressed in blue jeans and a grey shirt while wearing a mask on his face. His wife Shalini was spotted in a simple churidar.

Videos of the actor getting visibly frustrated over his fans clicking selfies with him by violating the lockdown is doing rounds in social media platforms since morning. After grabbing one of the cell phones of his fans, the actor signalled them to go away.

However, after few minutes, the actor has gave back the cell phone to the fan and advising him to wear a mask amidst this COVID 19 pandemic. Video of him apologizing to the public also surfaced in the Internet.

#ThalaAjith Requested his Fans to wear Mask!☺
Nice gesture by him ❤👌#TamilNaduElections2021pic.twitter.com/2t3O6S8ydL

Among the various kind of reactions, DD Neelakandan, a popular anchor who has been working in TV industry for past 20 years has came up with a tweet saying that she feels sad on seeing the way Ajith kumar was treated. She who acted in a number of films such as Pa. Paandi, Whistle and upcoming “Dhruvanakshathram” admired the patience of the actor through her tweet.

“The way Ajith sir was treated today was sad…. he gave us fans soooo much happiness , shudnt we giv him peace in return while he is exercising he basic right to vote with his family … but Ajith sir ur way too patient #Ajith” read her tweet.

The way Ajith sir was treated today was sad…. he gave us fans soooo much happiness , shudnt we giv him peace in return while he is exercising he basic right to vote with his family … but Ajith sir ur way too patient #Ajith #TamilNaduElections2021

Actor Ajith have always advised his fans not to spend much time on celebrating him and identified himself as a simple film actor. His frequent press releases suggested the fans to look after their family. Most recently, on seeing his fans demanding “Valimai” update to sports, political personalities, he released a press note asking them to wait.

He asked his fans to maintain dignity in social media platforms and in public places. “I believe that people who truly love me would realize what I said and act accordingly” his note which was released months ago said. Comment your views on this tweet of DD !!