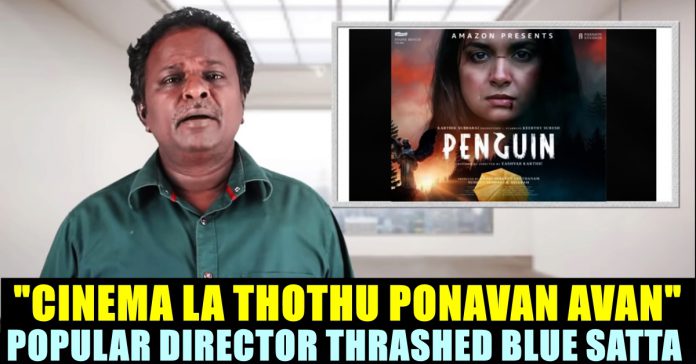 Shakthi Chithambaram participated in an interaction with Chithra Lakshmanan for his youtube channel Touring Talkies. In the interaction, the filmmaker shared about many of his experience in his filmmaking career which spans more than 20 years. He debuted to Tamil film industry through directing Sathyaraj in “Ennama Kannu” which released in the year 2000. Followed by this, he went on to make many movies and is very well known for his collaboration with actor Sathyaraj till 2010. After that, he took a long break and made his come back through the sequel of his earlier blockbuster Charlie Chaplin in the year 2019.

At the time of Charlie Chaplin 2 release, Shakthi Chithambaran and “Blue Sattai” Maaran had a clash and the former felt the review of the latter is disrespectful. The makers of “Charlie Chaplin” filed a police complaint against the movie reviewer and demanded a ban for him from reviewing movies. Now, in this recent interaction, Shakthi expressed his frustration over the youtuber who is all set to make his directorial debut soon.

“We should not spare him just like that. He acts like he holds a Phd in entire cinema. He wants us to make movies for his own standards as if he discovered cinema. He is the one who failed to achieve his goal in cinema. He wanted to become a filmmaker but he failed in it. With that grudge, he bashes every movie and its makers” Shakthi said in the interaction.

“What I am asking is, will he do the same after eating in Saravana Bhavan ? After buying a saree in Nalli silks, could he criticize their product ?? They will literally kill them, ain’t they ?? He thinks that we cinema people are cheap” the filmmaker said and went on to criticize those who subscribed his youtube channel.

“Those who are watching his movie reviews are not the ones who watches movies in theatres. All the people who are looking for ways to kill their boredom are liking his videos. They won’t watch any movie in theatre. He can’t make a movie flop. He is someone who can’t even make difference in his movie reviews. All his reviews are in same patten. Who is he to criticize the movies we make ??” questions Shakthi.

Shakthi also says that he talked with Blue satta Maaran and bashed him for the way he reviewed his movie Charlie Chaplin 2. “Blue Sattai” Maaran is one of the prominent movie reviewers of Kollywood films. He is very well known for his rural slang, funny phrases, short stories and for relating real life incidents in his movie reviews. For his unique style of movie reviewing, the man who always wears blue shirt has a separate set of fan following and his youtube channel Tamil talkies enjoys more than 10 lakh subscribers.

After seeing this review, in a press meet, Producer Siva and Shakthi Chidambaram thrashed Maaran and alleged that he is ruining the lives of many technicians who are part of the Kollywood films. “Our only aim is to ban him from reviewing films.” said Shakthi at that time.

Previous articleBhumika Requests People Not To Blame Bollywood Stars For Sushant’s Demise !!
Next articleAtlee Is The Main Reason For The Boost In Vijay’s Career ??

PM MODI Getting Severely Thrashed For Shooting For MAN vs WILD During Pulwama Attack !!

Prime Minister Narendra Modi will be seen in a never-seen-before avatar on August 12 when he ventures into the wilderness of Uttarakhand along with...

When Kamal Addressed About This Bigg Boss Issue 10 Years Ago !!

A 10 years old video of Kamal Haasan raising voice against women discrimination based on their marital status has surfaced in Internet after he...