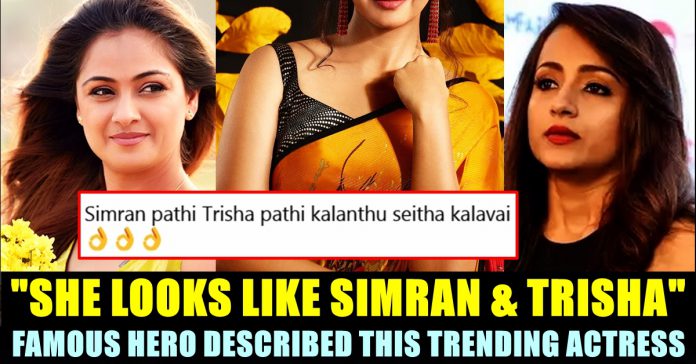 SJ Suryah who is very well known for his directorials, is now busy in acting feel good films. Followed by his adventure drama “Monster”, in which he paired with Priya Bhavani Shankar is again pairing with the actress for a movie which is being directed by “Mozhi” fame Radha Mohan. The title of the film was announced by actor Dhanush on 31st of December.

Actor/director SJ Suryah is very much active in social media platforms and is very much interactive with his followers in recent times. Now in his recent post the creator has came with a tweet saying that actress Priya Bhavani Shankar is looking partly like actress Simran and Trisha.

Simran and Trisha are two of the most beautiful actresses in Tamil film industry. Both the actresses are known for their performances as well. Simran’s prime time in her career was during late 90’s and in mid 2000’s whereas Trisha is still occupying a separate place for her in Kollywood. SJ Surya worked with Simran in Vaali and New. Both the actresses appeared in Rajinikanth’s recent blockbuster Petta as the love interest of the titular character.

The actress who gained many fan pages in social media platform in a very short span, has a separate set of fan following for her acting and screen presence. She debuted in Tamil film industry with director Rathnakumar’s “Meyaadha Maan” in which she paired with actor Vaibhav. She is all set to be seen in Karthick Naren’s Mafia. After seeing this tweet from SJ Suryah, many of his followers reacted to it in various ways.

What do you think on this comparison of SJ Surya ?? Comment your views below !!