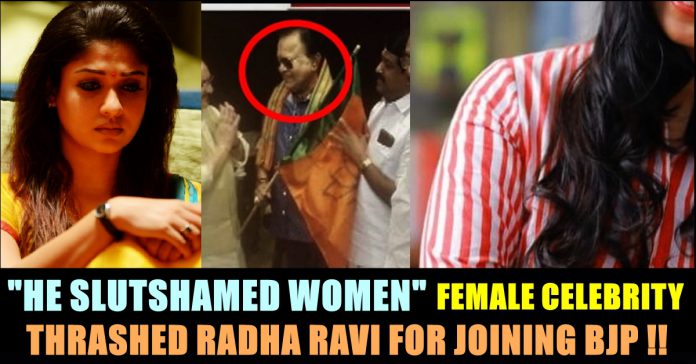 Earlier this year, DMK suspended actor and party leader Radha Ravi citing “indiscipline”, days after he made sexist remarks against actress Nayanthara. MK general secretary K Anbazhagan initiated disciplinary proceedings against Ravi on March 24. Radha Ravi, who is known for his insensitive digs, passed the comment on Nayanthara at the trailer launch of her upcoming Tamil film “Kolayuthir Kaalam” and got dismissed from the party.

Now the actor has joined BJP party according to sources. Radha Ravi is very much known for changing his sides in politics. Radharavi is a son of popular politician and actor M R Radha and he started his political career as a DMK party member. After that he joined MDMK only to return to DMK. He joined the AIADMK in the 2000s in presence of former Tamil Nadu CM J Jayalalithaa. He was elected for one term from the Saidapet constituency on an AIADMK ticket during the 2002 Tamil Nadu Assembly bye-elections.

Now, On Saturday, he joined the Bharatiya Janata Party (BJP) in the presence of its national working president Jagat Prakash Nadda, who was in Chennai for a one day visit to Tamil Nadu to unveil the foundation stones for party offices in 15 districts and to address party workers.

“Hi @BJP4India This man, Mr Radha Ravi is known to insult, abuse women at multiple events; even speeches on ‘Go ahead!! Rape!
He runs a Dubbing Union that bans those who question him / complain of sexual harassment in the industry. What message are you giving to women now?” read Chinmayi’s tweet.

Hi @BJP4India
This man, Mr Radha Ravi is known to insult, abuse women at multiple events; even speeches on ‘Go ahead!! Rape!
He runs a Dubbing Union that bans those who question him / complain of sexual harassment in the industry.
What message are you giving to women now? pic.twitter.com/zIuKQPCDF5

Followed by this she even tagged Smriti Rani to question about the same :

Dear @smritiirani Ma’am.
Mr Radha Ravi has joined your party in Tamilnadu. He has used many a stage / event to slutshame women. He runs / is the President of the Tamilnadu Dubbing Union where he bans those who complain of sexual harassment or financial mismanagement from work. pic.twitter.com/wF659o7dtx

Check out her other tweets regarding his addition in BJP party :

Ive been personally banned; have an injunction from the Honble CC Court in Tamilnadu also because I named Mr Vairamuthu, Padma Bhushan Awardee of being my molester during the second wave of the #MeToo Movement.

While the film industry here neither has an ICC, Radha Ravi continues to be President of the Dubbing Union preventing me from working here and he joined the ruling party to boot.
This gives no confidence to survivors who stand, mostly alone, fighting a system pitted against us.

Radha Ravi joined BJP ahead of the 2021 assembly election. Being a lawyer turned actor Radha Ravi is currently the president of Tamilnadu dubbing association. Comment your views on this !!

Pradeep Kumar who enjoys a separate fan base for his voice and music composition, in the wee hours of Saturday, replied to a random...