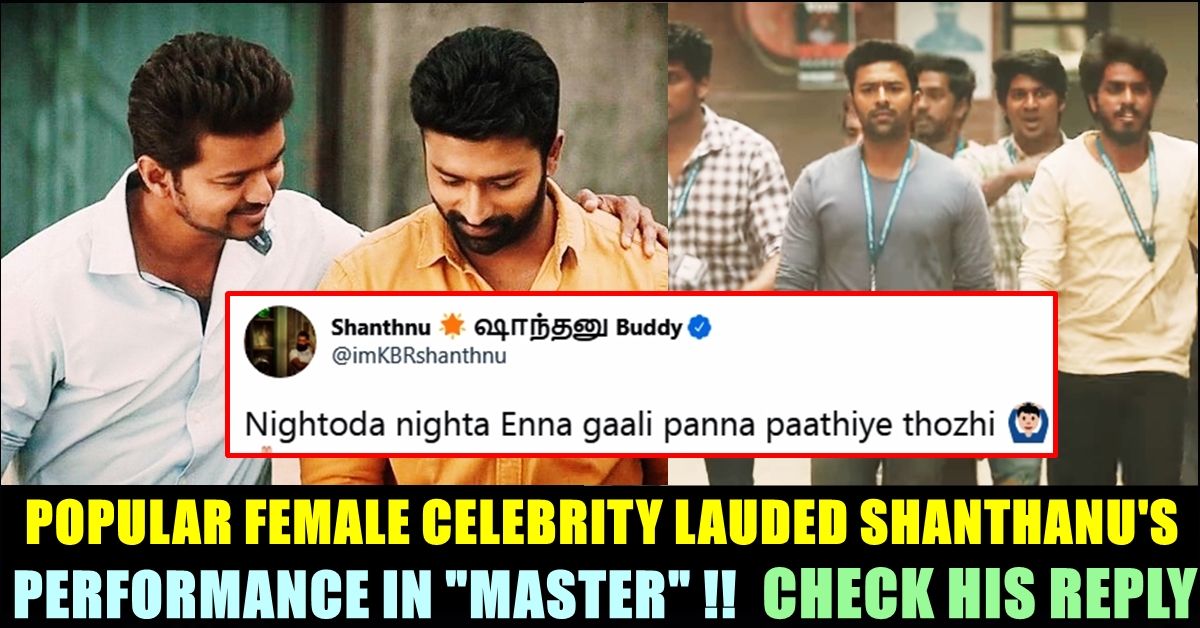 Alisha Abdullah, India’s first female national racing champion who recently got appointed as the President of Human rights, Anti Crime, Anti corruption of tamil nadu, has watched “Master” and uploaded a tweet appreciating actor Shanthanu. She deleted the tweet and uploaded a new tweet adding the names of actors Vijay and Vijay Sethupathi before mentioning Shanthanu. The “Chakkarakatti” actor came up with a hilarious reply to her second tweet.

In the film, Shanthanu played the role of Bhargav, a college student with an influential background. He who initially dislikes Gouri Kishen for standing against him in the college election, ends up having a strong bond with her. However, Bhavani, to avenge JD, kills him by staging a road accident. Many fans who expected Shanthanu to play a significant role in the film, started trolling him after seeing the movie.

First tweet of Alisha who congratulated Shanthanu added fuel to the trolls and they started making fun of her by saying that she has watched “Paava kathaigal” in Netflix instead of “Master” and uploaded the tweet. “Finally watched “Master” on Prime… feel so bad I couldn’t watch this film on the first day due to my injury, I must congratulate Shanthanu for ur amazing performance” wrote Alisha and tagged Shanthanu.

However, the racer immediately deleted the tweet after receiving so many trolls for it. She came up with a new one writing “Watched master movie again. huge appreciation to whole team, especially to @actorvijay sir, n @VijaySethuOffl sir was outstanding with his dialogues @imKBRshanthnu did his part really well Grinning face movie teaches us many lessons in life, thank you @Dir_Lokesh sir for this amazing movie”

Reacting to the trolls and mentions he received for the previous tweet of Alisha, Shanthanu added a GIF of Vadivelu and said that she almost finished him with her previous tweet in a humorous way. “Nightoda nighta Enna gaali panna paathiye thozhi. Ddankssss”

Ever since the film “Master” released in the theatres of Tamil nadu, trolls targeting the supporting actors of the film kept surfacing in the internet. Based on their limited screen time, users of social media platforms made memes to troll the actors. Actors Shanthanu, Deena, Andrea, Malavika Mohanan, Sanjeev became victims of the mindless trolls in social media.

The ensemble cast of “Master” includes Vijay, Vijay Sethupathi, Arjun Das, Nasser, Malavika Mohanan, Shanthanu, Gouri Kishen, Ramesh Tilak, Andrea, Mahendran with several other well known youtube stars. Earlier, Shanthanu gave a reply to trollers to shut them for once and for all.

“Oru scene oo, muzhu padamo.. it’s still an achievement to be part of such a magnanimous project & I’m proud of it” said Shanthanu in his tweet and added a video of himself celebrating the film’s first day first show.

Comment your views on this hilarious reply of the emerging actor !!

JUST IN : Court Issued Non-Bailable Warrant For Director Shankar !!
24 Year Old Youth Arrested For Flashing His Private Part In Front Of A Girl !!