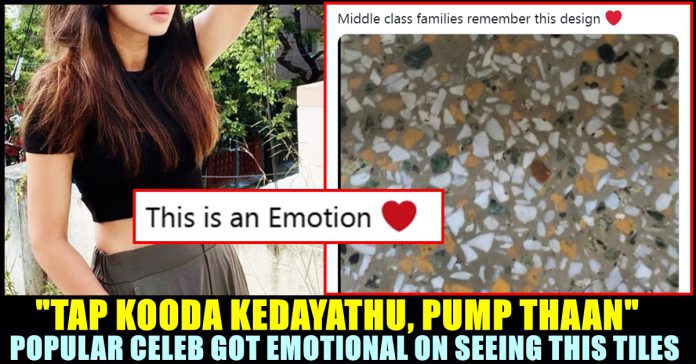 Popular video jockey Anjana who is pretty much interactive with her followers in social media platforms, recently got emotional after seeing a picture of a tiles design which was shared by a twitter user. Anjana is currently enjoying 13 and 18 lakh followers in Instagram and Twitter respectively. She who killed time during the initial lockdown by conducting photo shoots and uploading the pictures from it in her social media handles, seems to have found more time as the lockdown got implemented again amidst the second wave of COVID 19 virus.

On Thursday, Anjana came across a post of a social media user named “IT ponnu” and expressed how much she is emotionally connected to the picture that was shared in it. It was the picture of a tiles design which is being is used in most of the middle class families. On seeing it, Anjana said that it reminds her about her childhood. Anjana said that she lived in a tiled roof house during her college days which is when she also worked for Sun music as an anchor.

She said that she lived in the house till her marriage. “There was no tap as well and we used to make use of pump to get water. We had sand falling in our head” Anjana said and added that she lived her life with her own terms at that time by including the lyrics “Enaku raja’va naan vazhuren” from “Rakita Rakita” song.

Being a busy compere, Anjana effortlessly balancing her personal and professional which is evident through her Instagram timeline. She who did programs for Sun Music for nearly 10 years, got married to actor Chandramouli of “Kayal” fame in the year 2016. The couple gave birth to an adorable son and named him as “Rudraksh”.

India former captain MS Dhoni was clearly not impressed with the water boy Khaleel Ahmed for walking in the middle of the pitch as...

Rhea Chakraborty, girlfriend of Sushant singh Rajput confirmed her relationship with the actor and revealed that they were living together throughout the lockdown before...

Girl Criticized Samantha By Saying That She Is Encouraging People To Eat Unhealthy Foods !! Check What She Has To Say !!

Samantha Akkineni has been roped in as the new brand ambassador for Kurkure snacks. Samantha herself announced this on her twitter account. She tweeted "Extremely...

The Cutie Pie Who Advised Her Mother Is Smithika & Her Videos Are Going Viral !!

"Smithika is so matured, she is the one who advising us and she also the one who is so emotional who will shed tears...