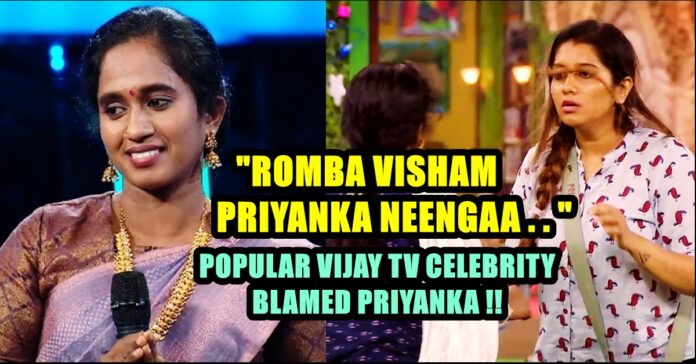 As a part of the ticket to finale task, Bigg Boss gave 10 eggs to each contestant and asked them to save it till the end of the task. Two contestants who have less number of eggs will be eliminated from the task which is being conducted to discover the finalist, said Bigg Boss. Raju and Amir broke the eggs of Pavni and Thamarai respectively to evict them from the Ticket to finale task.

Even after a lot of struggle, Pavni couldn’t break the eggs of Raju who broke her egg. Meanwhile, an intense argument broke out between Thamarai and Priyanka. When the argument got escalated, Priyanka who pushed Thamarai for three times to save her eggs, got pushed away by the drama artist in a forceful way. Priyanka who didn’t see that coming, started shouting at Thamarai and called Bigg Boss claiming that she got hit by Thamarai.

While addressing about the fight that took place between Thamarai and Priyanka, James Vasanthan said that Priyanka was the one who started it. “She started manipulating the entire scenario after Thamarai decided to push her back. Priyanka you are a poison. We never expected you to manipulate the entire scenario like this” James said.

“You should see the episode after coming out of the house. The way you lied blatantly looked poisonous to us. You pushed her and she pushed you. And you twisted the entire incident after she pushed you” James Vasanthan said.

India’s Youngest Billionaire Slammed By The People For Showcasing His Donation To Kerala !!

Kerala is drowning and several influencers, industrialists, celebrities and politicians have turned benefactors for the state, donating small to large sums of money. However, India's...