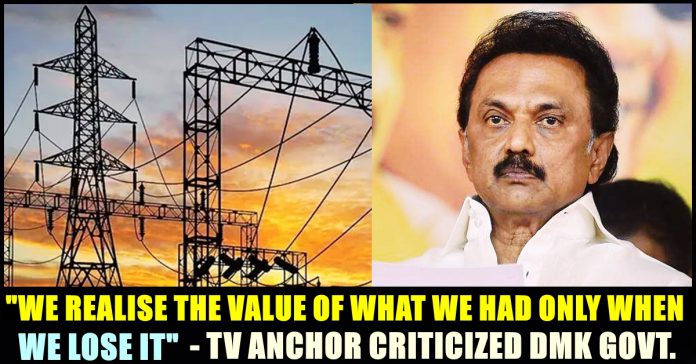 Popular Television Anchor Sumanth Raman whose twitter bio saus that he is a Political analyst, came up with a tweet on Monday morning, criticizing the current government for continuous power cut in Kancheepuram district. He took a sky dig at the MK Stalin led Tamil nadu government by saying that one realises the value of something only after losing it, referring to the AIADMK government which ruled state Tamil nadu for the past 10 years.

It is very well known that the years between 2006 and 2011 were a nightmare for the DMK government due to the frequent power cuts in state Tamil nadu. Now, after coming to power after 10 long years, many alleging that the same problem has started to occur all over again and coming up with reports about the power outages in different areas of the state.

In a way of clarifying about the situation, Electricity Minister V Senthil Balaji accused the previous government of lack of maintenance in the last 10 months. He promised to rectify the situation in 10 days in a press meet. He also mentioned about how squirrels were causing the power outages by running on the power cables.

When he faced online trolls and received a remark from ADMK’s Sellur Raju, Senthil Balaji came up with a tweet attaching the proofs to prove how ADMK government pointed out squirrels as a reason in 2020 for the power outage in Aalankulam. “It is the clarification ADMK government provided in 2020 to Madurai High Court. I request Sellur Raju who looks like an educated individual to know about it by asking about it to Former minister P Thangamani or High court.” he said in a tweet by attaching proofs.

This tweet garnered wide attention from the users of the social media platform. Check out some of the reactions his tweet received below :

Half of Chinna Kancheepuram has no power. Are you from IT cell?

I know this was put out in the papers. Same area did not have power on Friday also for 3 hours. Why does maintenance need such frequent power cuts?

You are a jobless man always on the look out for blaming the DMK Government for something or the other.We understand it is burning inside and you need vilakkennai to cool it off.

Before criticising a new Government, there is always a cooling off period of six months

Two months before elections, we had power cut for an entire night at my place. From 12 in the night to 8 the next morning. Don't think it was even maintenance. Surprising people think the state has never had power cuts before 🤦🏾 https://t.co/FvKsfY8qZT

“Please see the comments below the tweet. IT cell and ruling party supporters may kindly read and understand there is an issue, instead of abusing me.” Sumanth further tweeted.

Please see the comments below the tweet. IT cell and ruling party supporters may kindly read and understand there is an issue, instead of abusing me. https://t.co/WQ7DZHzj4P

Previous article“Mind Your Own Business” – Follower Mocked Nakkhul’s Initiative !! Here’s How He Replied
Next articleControversial Tweet Of Activist-Lawyer Marked As “Misleading” By Twitter

Fan Said Actress Ileana Is Having “Awkward” Body Shape !! She Totally Shut Him Down With Her Reply !!