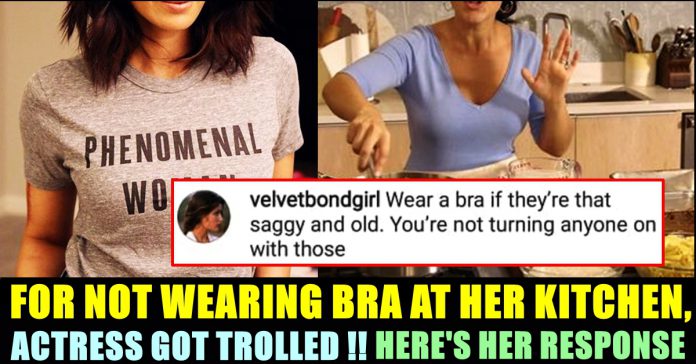 Padma Lakshmi, a chennai based American actress and TV program host, came up with a fitting reply to those who questioned about her choice of wearing inner wear in her home’s kitchen. Lockdown has implemented, not only in India, but across the globe but with different limitations. Since the Corona outbreak took place, Many are glued to the Internet as they have no place to go and few people attempting to grow a good habit such as practicing yoga etc.

Padma Lakshmi who is a host of the US cooking competition program Top Chef since 2006, she also three cookbooks and one memoir. She has also ventured into acting in film and television, and hosted several cooking programs before Top Chef. She also launched her own kitchenware line. Now, in a way of making use of this quarantine period, Padma is constantly posting cooking videos in her official Instagram account, in which she enjoys nearly 7 lakh followers.

Check out one of her videos here :

We made Chicken Tagine 🐔

Though she is garnering tons of love from her followers for the content she provides in her videos, few of her followers very much worried about her attire. For her recent posts, she has been receiving comments from people asking why she is not wearing brassiere while recording her cooking videos. To one of a user who asked “Is no one going to comment on why she feels the need to put her nipples on social media in every video? No? Just sad”, Padma replied by saying “no because everyone is an adult here, Natalie. And if I don’t want to wear a bra in my kitchen sometimes during this everlasting quarantine that shouldn’t be your concern”

As we can see, this comment of Padma alone received nearly 8000 likes. Now, Padma has came up with a cooking video containing a caption mocking those who questioned her choice of dressing. She said that she was wearing a two bras while recording that video and asked them not to police women’s body in 2020. “I got some comments last time that it was immoral for me to not wear a bra in my own kitchen during the quarantine. So those people should be happy to note that I’m wearing two today 😂. But seriously, let’s not police women’s bodies in 2020 ok?” her caption for her recent post read.

(I got some comments last time that it was immoral for me to not wear a bra in my own kitchen during the quarantine. So those people should be happy to note that I’m wearing two today 😂) But seriously, let’s not police women’s bodies in 2020 ok?

This is one way to give them what they deserve ain’t it ?? Comment your views on this caption of the passionate cook !!