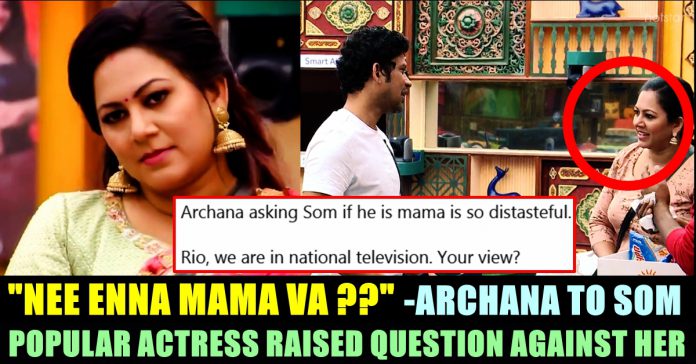 Veteran actress Sripriya who is known for pairing up with Kamal Haasan and Rajinikanth, along with several other twitter users, called out Archana as she dubbed her co-contestant Somashekar as “Mama” when he conveyed a message to Rio on behalf of Anitha. Many people questioned the way Archana is ill treating Soma shekar in the name of expressing affection right from the beginning of the show.

Archana entered the Bigg Boss house as a wild card contestant. On the 71st day of the reality game show, Rio and Anitha had a brief argument over an incident that took place last week. Anitha accused Rio of involving in favouritism while choosing the boring contestant of the week and the latter completely denied it. They continued arguing over the issue till the nomination process of this week. The argument got elevated to the next level once Anitha said that Rio is leaving the spot abruptly as he didn’t have to guts to face her.

Later, as the issue was not resolved between the duo, Anitha asked Somashekar to call Rio to talk with him. When Som conveyed it to Rio, Archana who was present there, asked Som whether he is a “Mama”. “I talked with Anitha and she wants to talk to you when you are free” said Som to Rio to which Archana could be heard responding “Oh, so you are the messenger ?? Are you a “Mama” ?”

“I don’t understand what you are trying ? You are a solo player” Archana said to Som. On seeing this, actress Sri Priya who is following the show since the beginning, posted a tweet questioning “Do people who convey message are “Mama”??

Here’s the reply of Kasthuri :

Actor Shivakumar who is also analysing the show since last season, expressed his disagreement with the behaviour of the TV anchor. He also slammed Somashekar for not reacting to it.

How ever your close with someone …You don't have any rights to call anyone disrespectfully! How dare u would call him MAAMA??! And that guy just takes it easy like he has no 🥎🥎 He is indeed a showcase Doll! And Maaaami Nokku neram 🤢🤮#BiggBossTami4 #bigbosstamil4

Many other users of Twitter who watch the show slammed Archana for humiliating Som. They also pointed out how she behaved when Rio patched up with Anitha. “No one illtreats Som in the house like Bossy Archana does. Teases him very nastily everytime he has an interaction outside lovebed gang. Today she has gone overboard by calling him “ni enna mama va” avalukaga ni pesa vandhurka.” a follower wrote.

No one illtreats Som in the house like Bossy Archana does. Teases him very nastily everytime he has an interaction outside lovebed gang. Today she has gone overboard by calling him "ni enna mama va" avalukaga ni pesa vandhurka.#BiggBoss4Tamil #BiggBossTamil4 #BiggBossTamil

#BiggBossTamil4 #Archana was on cringe mode completely on unseen. This woman deserves no place in a show being watched by millions. Ridiculing #Rio for patching up with Anitha, calling him an approver, spraying deo on him, calling #Som a mama. Cheee 🤮🤮 So much hate!

Why #archana whats ur prob, if som talks 2 #anitha, he didnt complaint, rio is involved, how can u call him mama? For valarppu, galeej sam is out, u r using too many words, mic illama what else u spoke? Got nicely frm #bala, u r not owner of BB and u dont own som #BiggBossTamil4

Archana asking Som if he is mama is so distasteful.

Rio, we are in national television. Your view?

Ban #BiggBossTami4 or evict Archana. She said som as “r u MaMa work for Anitha”. This is so offensive for both som and Anusha in a public show esp Anitha. This is so demeaning to a home. #BigBossTamil is a vigilant enough to evict her. @STARVijayIndia @ikamalhaasan #evictarchana

N u want all to play happily?

Som kitchen la Rio kita Anitha pesanumnu solrappa Archana kekra mama velai pakuria nu. But Som ku onnum thappa therla pola puppet mari poran. If somebody else use this kind of language will he be ok. Archana has to go out. #BiggbossTamil4

And som had no problem with it..

Or is he still in Robot mode?

What a apineless creature.
🙄🙄🙄#BiggbossTamil4 #BiggBossTamil

Mama!!! Why is #Archana being so unethical???#BiggBossTamil 😡😡

Previous article“Pandiyan Stores” Venkat Got Upset On Seeing This News On Chithra’s Death Case !!
Next articleYashika Aanand Opened On Her Relationship With Balaji Murugadoss For The First Time !!

Bigg Boss Kaajal Called Out A Guy Who Made Obscene Comment !!

Kajal Pasupathi who participated the second season of Bigg Boss show, has been very much active in the micro blogging social media site, expressing...